Does that phrase strike fear in your heart?

Yes, we're talking about tests today. But not taking one, so relax.

In Excel Math we provide all sorts of questions, but on quarterly tests in the upper grades we ask students to do bubble-in answer sheets. This is to give them practice with that most horrible of all challenges - the standardized testing answer sheet. Getting the right answer is only one of the tasks. Putting it in the right place is another. And fully shading that little box is a third. 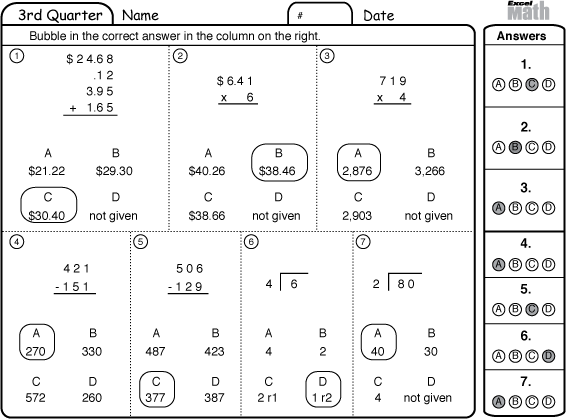 Here you go. I said we're not taking this test, and to prove it, I have turned on the answers.

On this type of test you must make a selection from multiple choices, then find the letter of the answer, move to the right, locate that letter inside a circle, and darken the circle with your pencil.  You're probably familiar with this, but it's not a trivial conceptual skill, and it is terrifying to some people.

Why does the education community add this challenging element to tests? To make tests easier to grade. 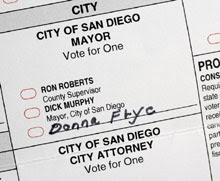 We the People often use the same technique on ballots. A few years ago there was a huge outcry during our local mayoral elections. No hanging chads for us here in California. But we learned that for a write-in ballot to count, we had to write in the new name on a blank line and ALSO darken a box on the ballot.

If either of the pieces of data on that line were missing, the vote didn't count. Since the box was right there next to the name, several thousand voters didn't bother to color it in. The write-in candidate would have won, but all those votes were invalidated. Regardless of a voter's opinion of this particular candidate, it seemed a bit unfair. But this interpretation turned out to be a state law (if in doubt, throw it out), which further inflamed folks who rant about BIG GOVERNMENT.

I suppose this comes down to the age-old question:

Do machines serve the people, or do people serve the machines?

In both of these cases, the voters or students serve the machines owned by the people administering the ballot or the test.

So when you come to class, or go to vote, be prepared. Bring two Number 2 pencils in case you break the point on the first one. Read the instructions. And fill the boxes as requested, not just any old way you like.

Posted by Excelmathmike at 8:24 AM