Be sure to stop by the Excel Math booth at the NCEA 2015 Convention in Orlando April 6-9.

Bob and Brad will have samples of the newest Excel Math materials on display. And you'll be able to enjoy sunsets such as these. 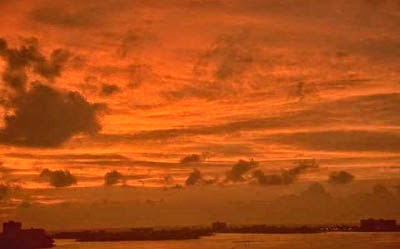 In addition, you can pick up a piece of chocolate at the Excel Math booth #526.

Plus you will be able to  browse through the newest Excel Math materials. Excel Math is available in three versions:

You can help your students succeed in mathematics skills with Excel Math for Kindergarten through Grade 6. 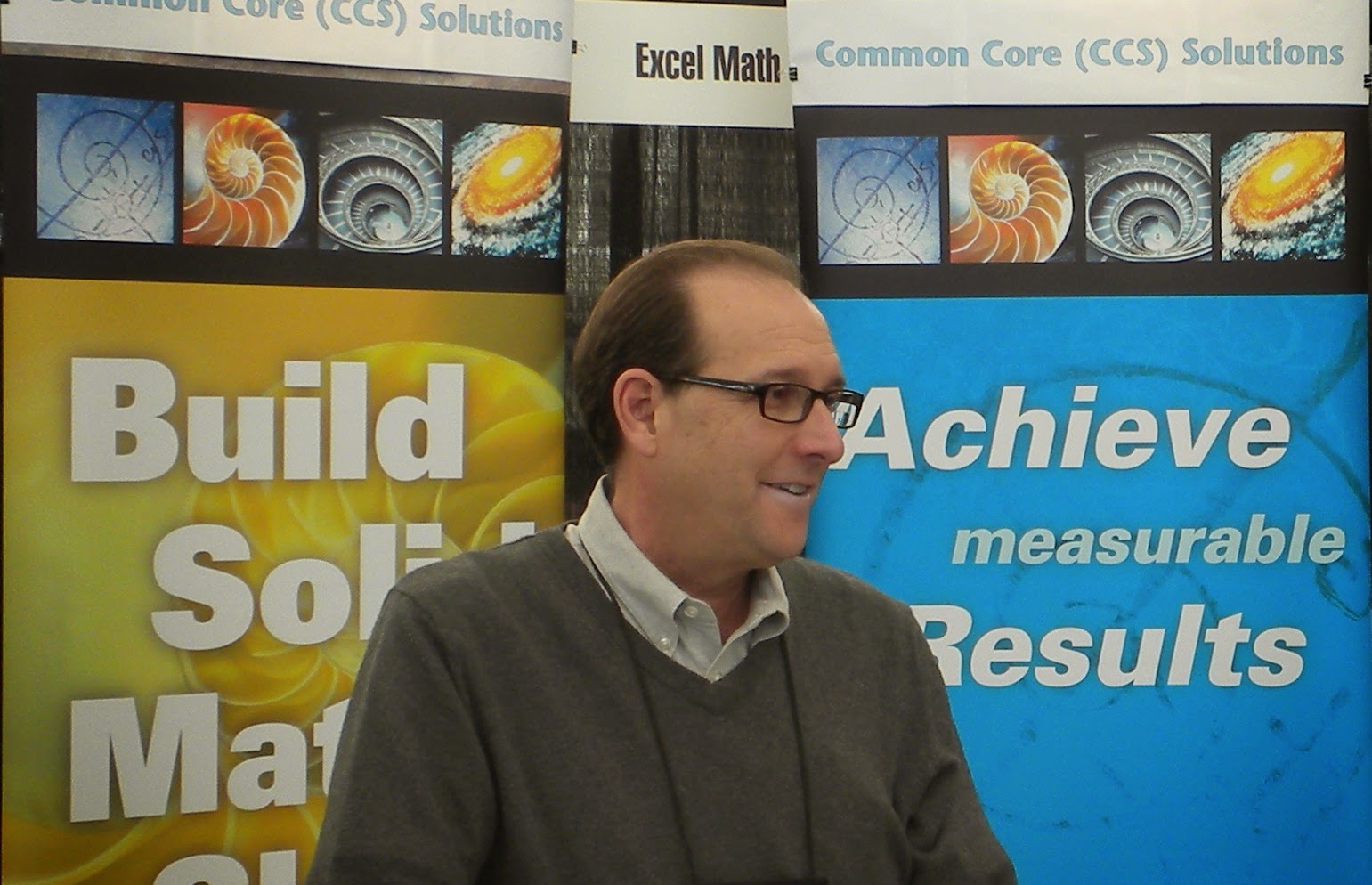 It's Digital Learning Day in the Math Classroom


Calming the Frenzy Over Fractions

Visit Excel Math at the ASCD Convention in Houston

On March 21, administrators and educators from around the country will gather in beautiful Houston, Texas for the ASCD Convention & Exhibit Show.

Excel Math will be there, too.

Be sure to stop by Booth #646 at the George R. Brown Convention Center (Level 1) in Houston and say hello to Bob and Brad. They will be handing out chocolate and showing off the newest Excel Math materials. Bring your questions! 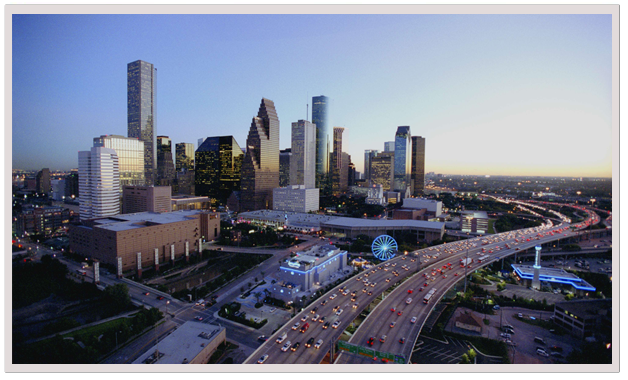 Warm up in Houston at the ASCD Convention.

You can see a very cool interactive map of the exhibit hall and find out how to get to the Excel Math booth on the ASCD Convention website.


This year the convention theme is Challenging Convention//Leading Disruptive Innovations.
According to the conference program,

You can make a transformational change in your students' mathematics skills with Excel Math for Kindergarten through Grade 6.

If your state is teaching to the Common Core Standards, order our Excel Math Common Core Teacher Edition.

If you are teaching to the new TEKS, order our Texas Excel Math Teacher Edition.

If you are in a non-Common Core state (or school), you can use our Excel Math Standard Teacher Edition.

Whichever edition you use, your students will receive the benefit of our proven CheckAnswer system, unique spiralling process, and math lessons that really work!

Visit Excel Math at the Title I Conference

Calming the Frenzy Over Fractions

Begin with this fun shamrock math facts bulletin board. Use it for either addition, subtraction, multiplication or division of whole numbers, decimals or fractions.

With Excel Math, students learn math concepts that spiral back into the lessons and Guided Practice on a regular basis, using spaced repetition. Students also get lots of practice with basic math facts so they begin to feel comfortable with math and gain confidence as they succeed. 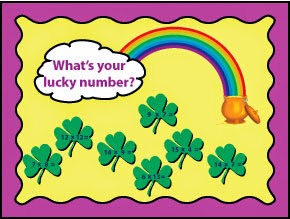 Then let your students solve the math facts shown on the shamrocks.

For Timed Basic Fact Practice on the computer, try our ArithmAttack game. Your students can practice addition, subtraction, multiplication, division or a combination of all four.

Pipe a ribbon of green around the base of the marshmallow (wait until the chocolate dries, if you use chocolate coating). 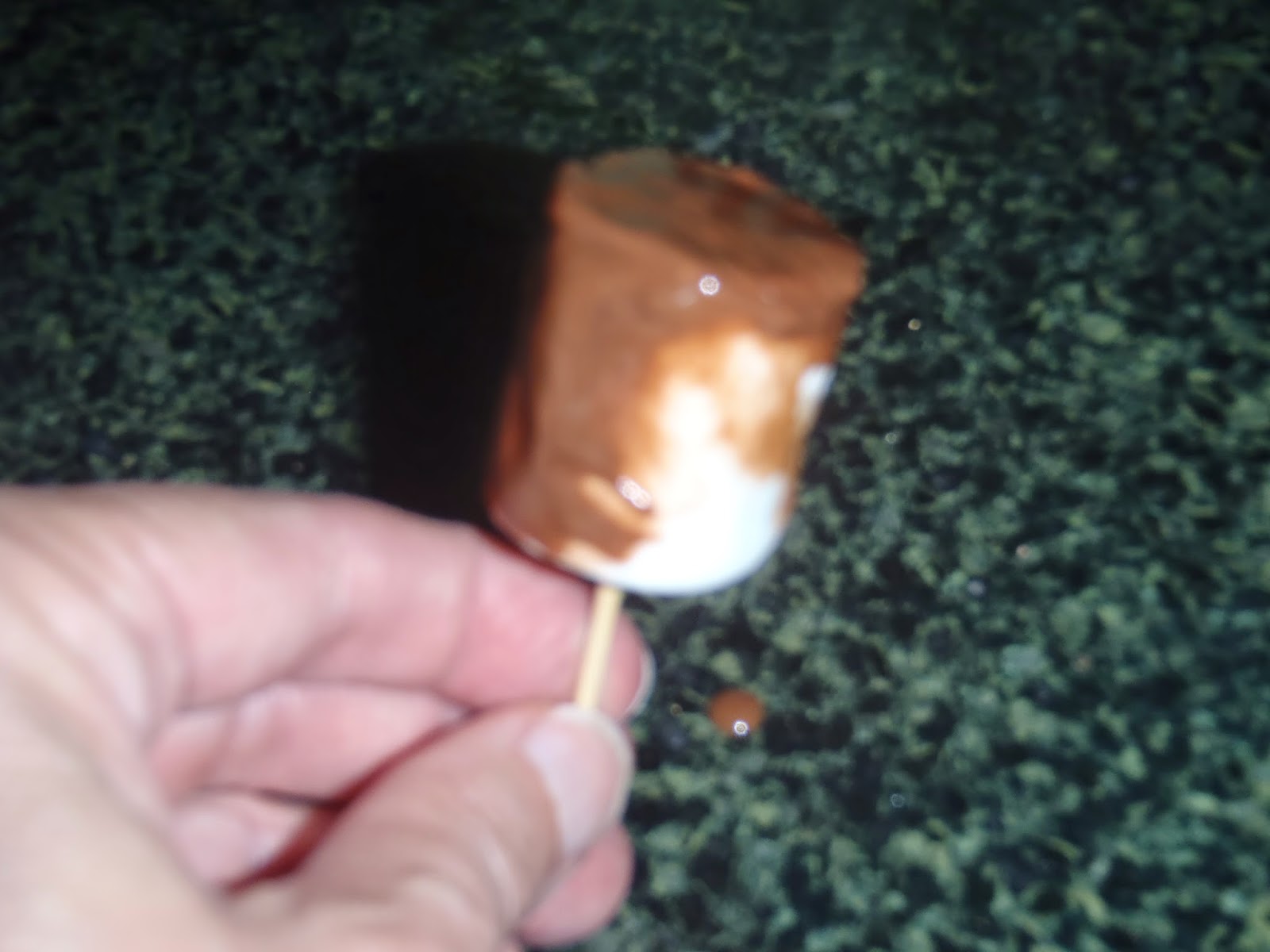 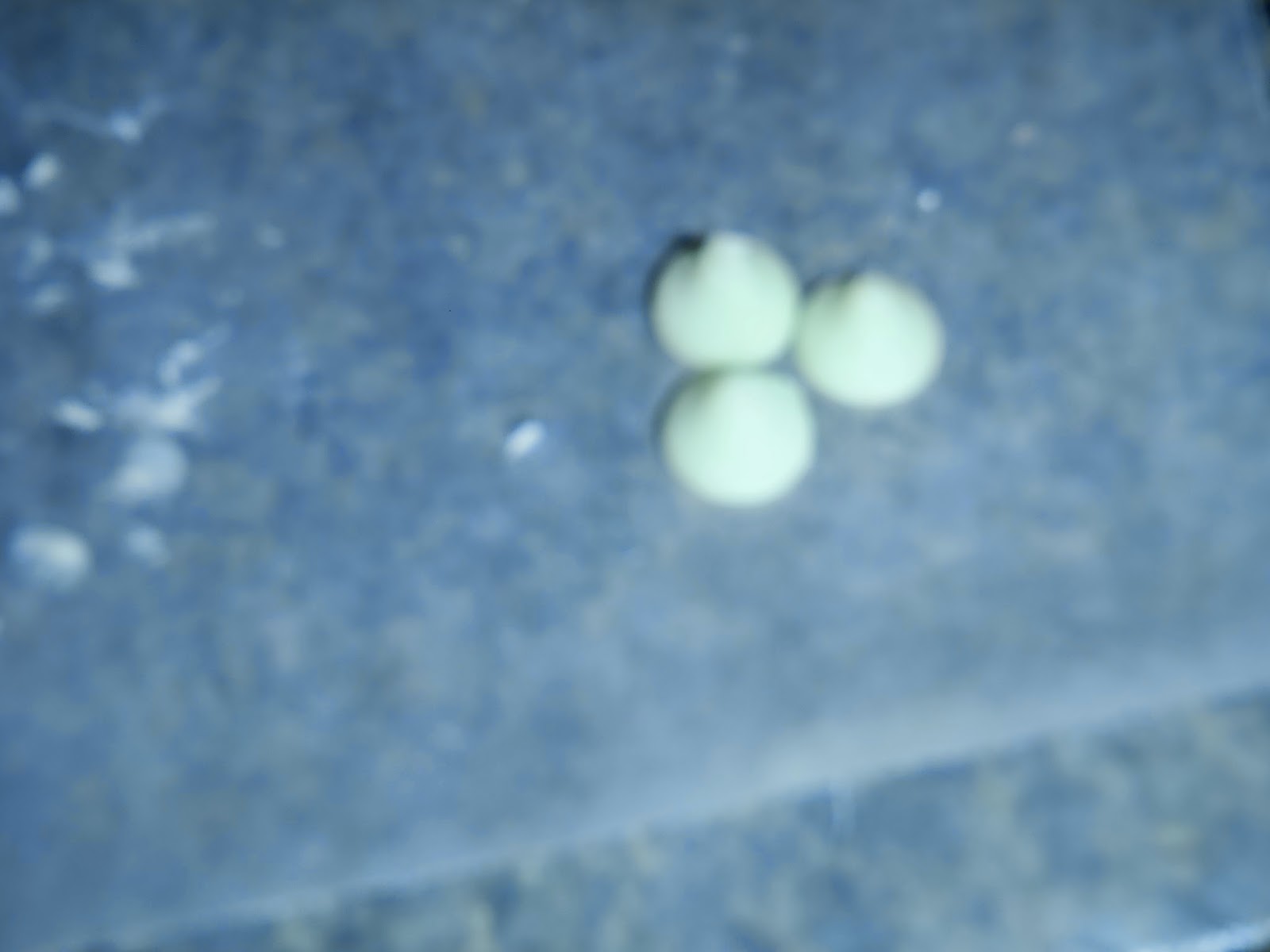 To make shamrocks, place three green mint chips in a triangle shape on a piece of wax paper, so the mints touch. 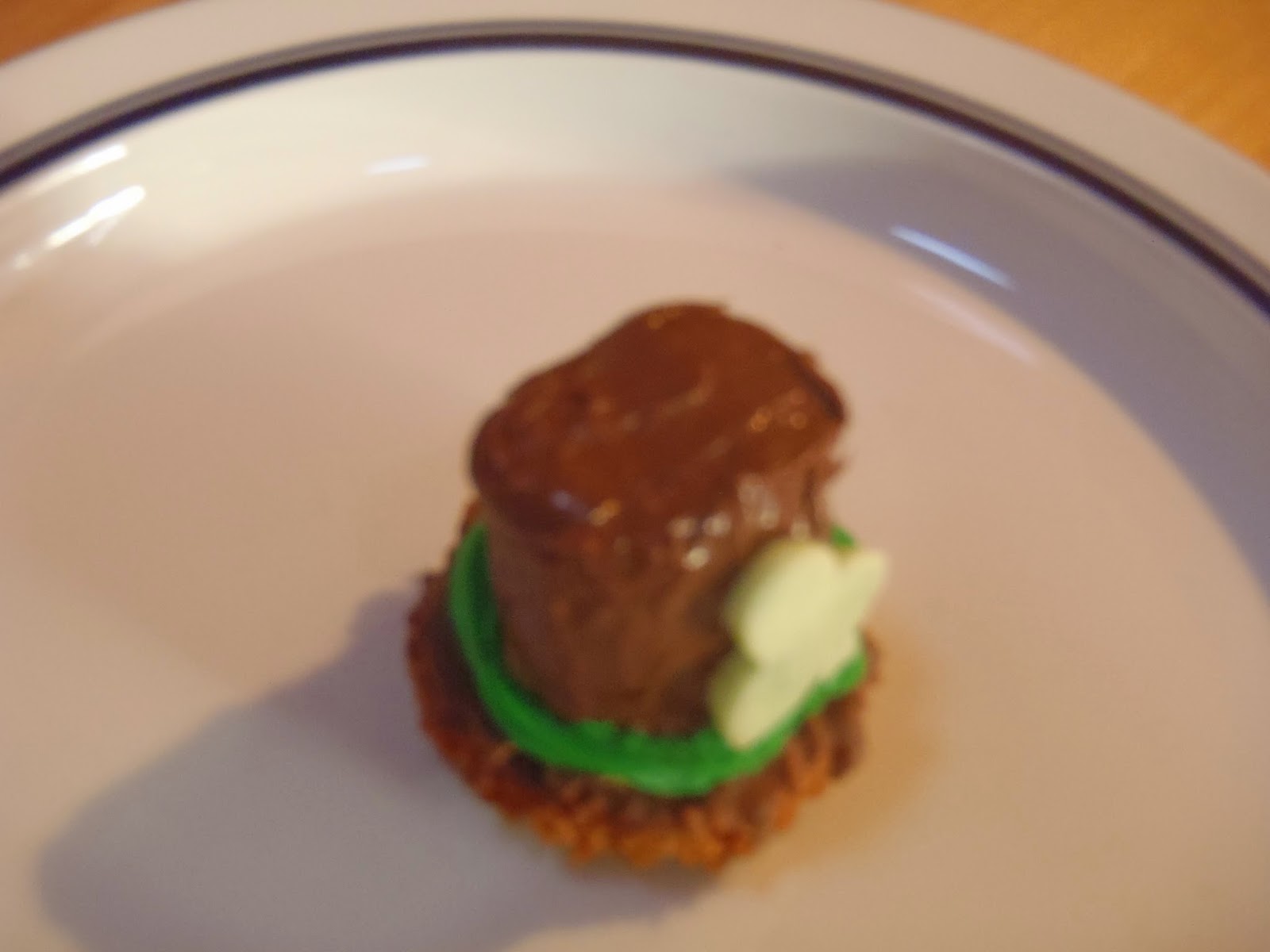 Remove the clovers from wax paper when hard and place above the green rim on the marshmallow to form a decoration on the hat. Let your students eat the hats after successfully completing their Guided Practice or Basic Math Facts sheet. You could also provide chocolate or paper gold coins if you prefer not to make the snack. Feel free to give each student a Shamrock from the patterns below to decorate the hat if you don't have time to melt mints. 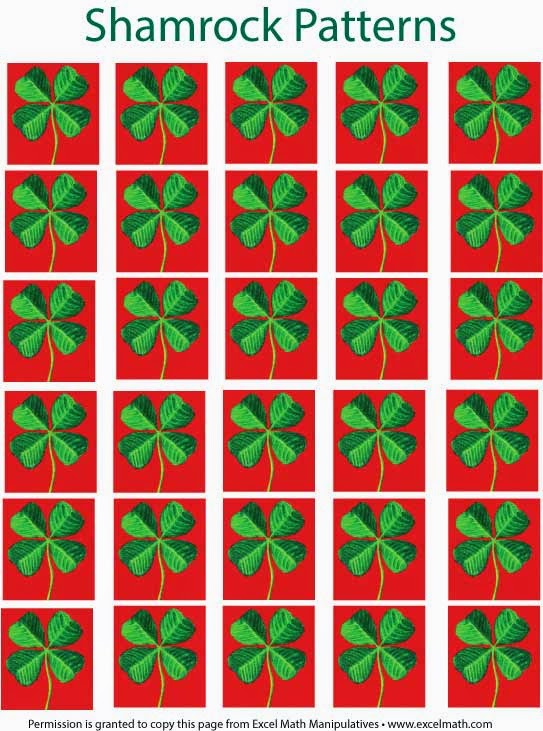 Leave a comment in the box below to let us know how you celebrate digital learning in your class.www.excelmath.com/downloads/manipulatives/shamrocks.pdf
Posted by Unknown at 4:00 AM 0 comments

It's Digital Learning Day in the Math Classroom! 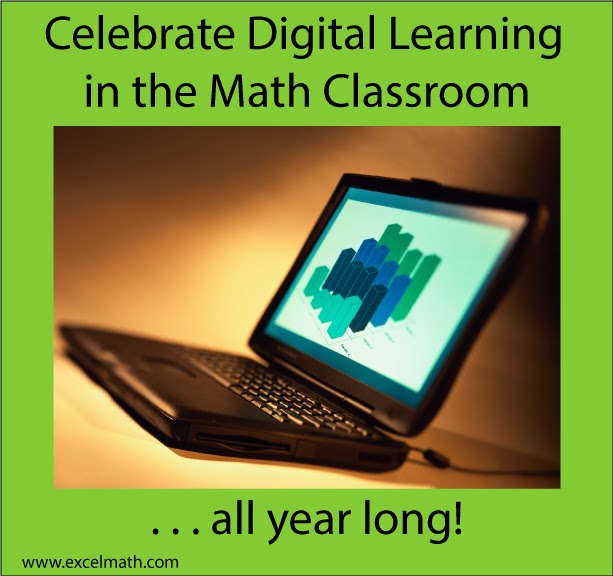 The goal is to make learning more personalized and engaging and encourage exploration of how digital learning can provide more students with more opportunities to get the skills they need to succeed in college, career and life.

Watch how teachers, school leaders and district teams across the country are successfully implementing digital learning strategies for the twenty-first century. Watch videos and read more at http://www.digitallearningday.org

With Excel Math, students learn math concepts that spiral back into the lessons on a regular basis, using spaced repetition. Excel Math worksheets encourage students to write answers to problems as well as how they arrived at the answers, helping students retain math concepts in long-term memory.

Teachers use Projectable Lessons on CD to focus as a class on the lesson of the day using whiteboards or electronic boards where students can show their work to the entire class.

Timed Basic Fact Practice give students a chance for basic math fact practice with addition, subtraction, multiplication and division or a combination of all four. 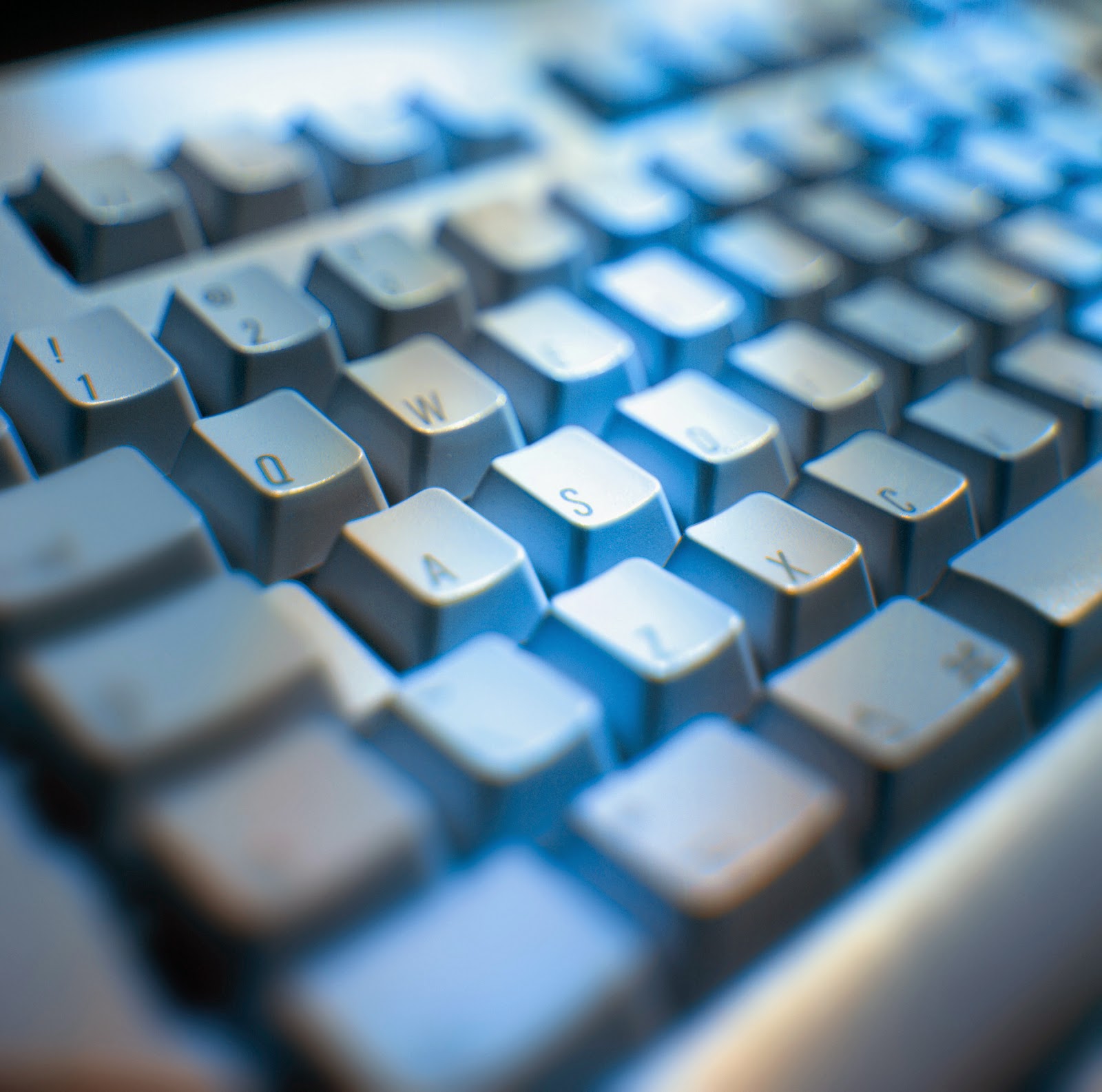 Leave a comment in the box below to let us know how you celebrate digital learning in your class. 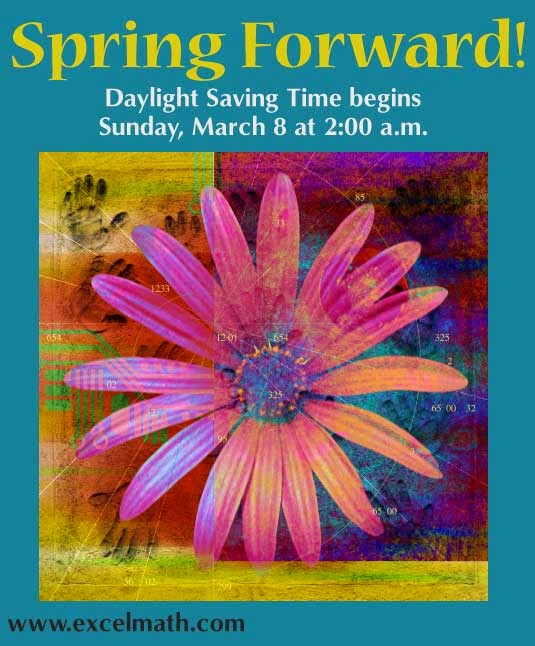 On Sunday, March 8 Daylight Saving Time or DST begins once again. DST is often incorrectly referred to as "daylight savings time." Other countries call it “Summer Time.” When DST is not observed, we say we are observing "standard time," "normal time" or "winter time."

Unless you live in Hawaii, parts of Arizona, all of American Samoa, Guam, etc. you will be resetting your clocks this weekend, moving them ahead one hour (to 3:00) on Sunday morning at 2:00 a.m. or before you go to bed Saturday night.

Standard time zones were introduced in the US and Canada by the railroads in 1883. Before this development, time in each local area was determined by the sun overhead at high noon method.

Details of making it work were left to the Interstate Commerce Commission, which controlled train schedules. The bill also established DST.

Due to constant bickering and complaining, DST was repealed in 1919. It was re-established nationally during World War II, ending in September 1945. After the war, observance varied depending on where you lived.

During the "energy crisis of 1974," Congress temporarily set the starting days as January 6, 1974 and February 23, 1975, then DST reverted back to the last Sunday in April.

The 1986 Public Law 99-359 shifted the starting date to the first Sunday in April, 1987. The ending date remained the last Sunday in October.

The website TimeandDate.com gives a brief (but not complete) overview listing which countries and territories plan to observe DST this year.

You may want to have your students discuss the value of Daylight Saving Time and whether it actually helps us save time in the year 2015. They could list the pros and cons and then take a class vote to find out if it's worth keeping.

In Excel Math, students learn to tell time, calculate time across weeks and years, find time intervals on a number line and much more. Take a look at sample math lessons for Kindergarten through Grade 6 on our website: http://excelmath.com/products.html 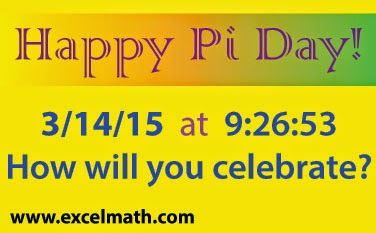 Next week we celebrate National Pi Day! On March 14 (3.1415926...) we recognize the never-ending number π with classroom celebrations, special events, food, song and rhyme.

Pi is the ratio of the circumference of a circle to its diameter. Pi is always the same number, no matter what size circle you use to compute it.

You might want to plan a Pi Day celebration for your students to help them remember this special number. They could write their own songs and poems, see how much of the number Pi they can recall, draw pictures of what comes to mind when they hear the word infinity, solve a Pi-related brainteaser, and enjoy some Pi-related snacks.

You could even hold a school-wide Pi-athalon at 9:26 where you have students ride tricycles, eat pie, recite the digits in pi, solve pi-related brainteasers, etc.

Pi Day Bulletin Board and Ideas for the Math Class

Pi Day in the Math Classroom

Celebrate Read Across America with Math 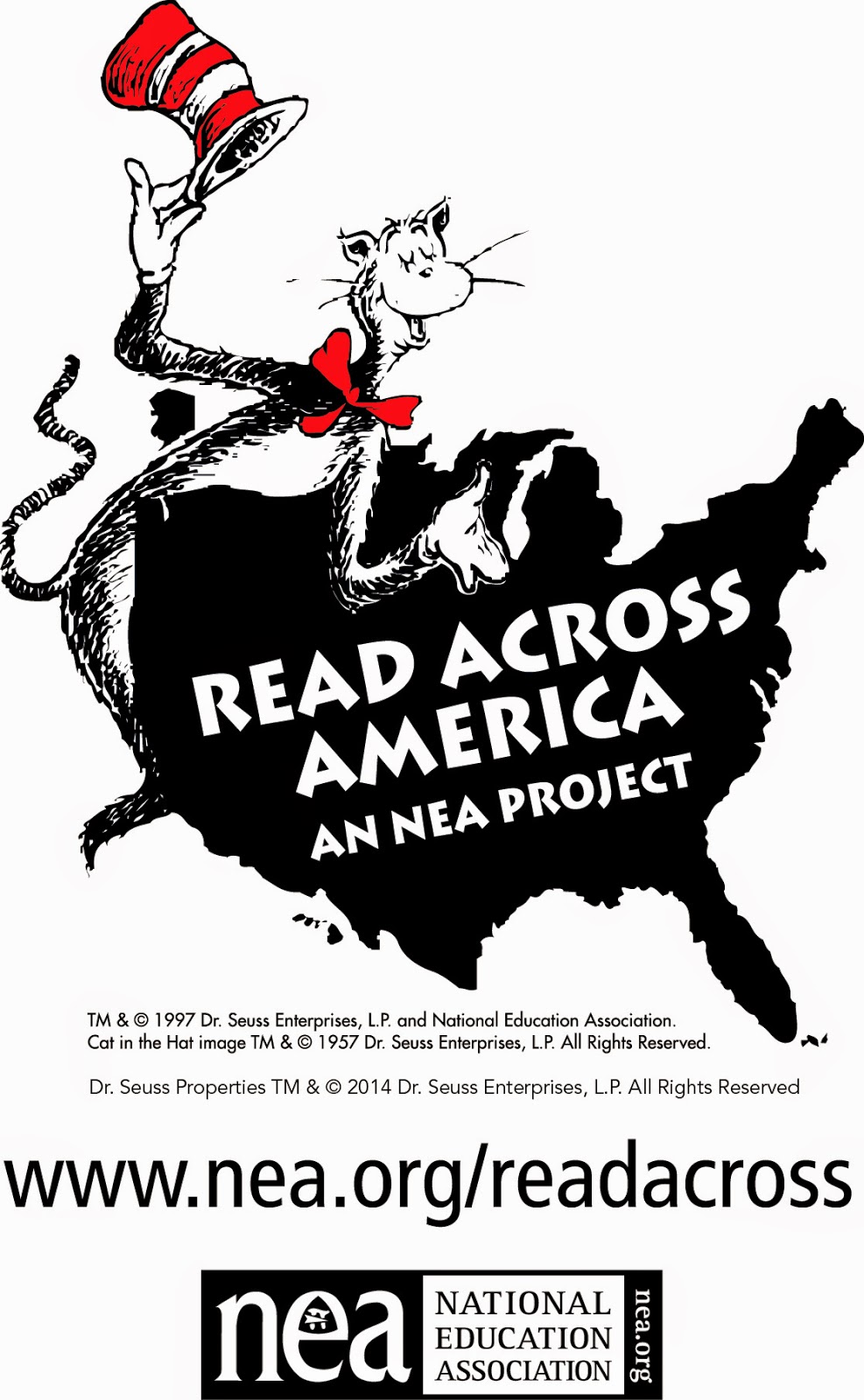 March 2, 2015 is Read Across America Day or Dr. Seuss Day. This year the book being read across America is the Dr. Seuss classic, Oh, The Places You'll Go. After reading it to your class, let your students write their own story (or poem) in a similar Seuss style or summarize the book or set some of the lines to music.

You can read more about Dr. Seuss and download posters, visuals and certificates for Read Across America Day from the NEA website:
http://www.nea.org/grants/61668.htm

You can also get activity ideas and event suggestions for Read Across America Day. You may want to celebrate reading and books (especially those by Dr. Seuss) all week just you can try out a variety of reading and literacy activities with your students. 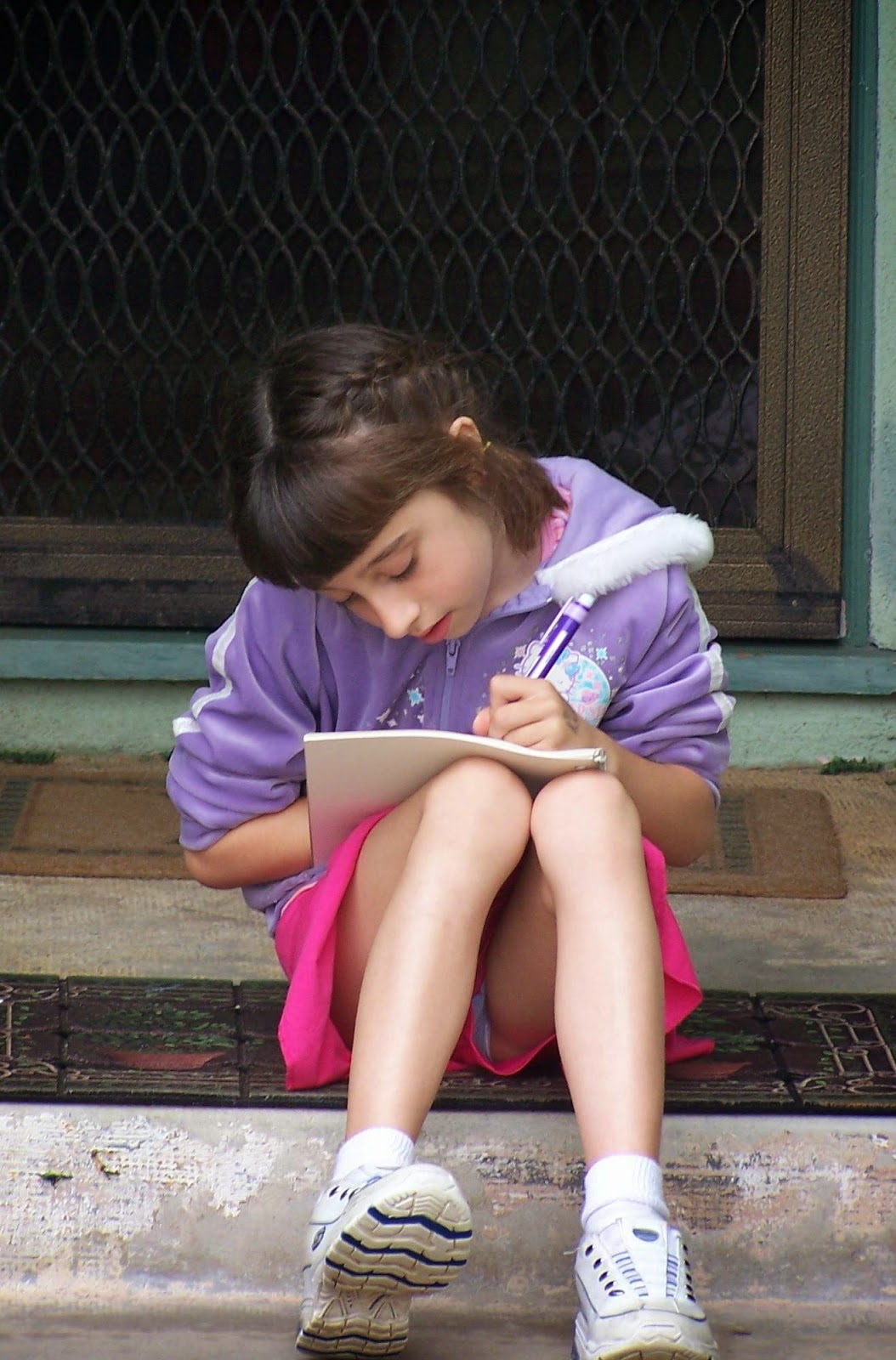 The Hats Off to Reading Educator's Guide gives some fun teaching ideas and creative suggestions for celebrating Dr. Seuss in the classroom.

After reading The Lorax together, you could challenge your students to come up with some ways to conserve natural resources, recycle, reuse and reduce waste.

Help your students tidy up their desks and work areas after reading The Cat in the Hat. Let your students make posters encouraging their classmates to pick up after themselves, recycle paper and aluminum, and conserve water and energy at home as well as at school.

You may want to ask your students to share their favorite Dr. Seuss books or characters, write their own poems, stories or songs, make up their own colorful Seuss-style character, and then share their creations with others. 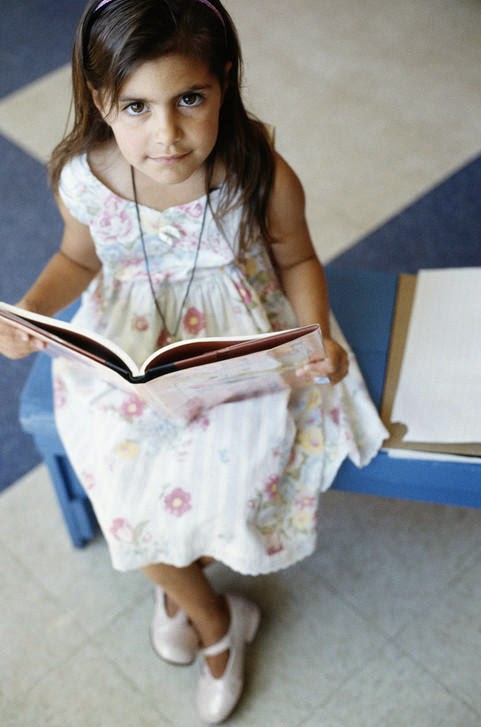 What do you do to encourage reading and literacy in your classroom? Share your ideas in the Comments box below. 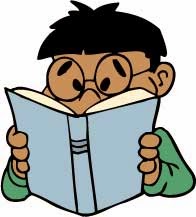