This is the third in a series on Bells and why they are related to math we learn in elementary school.

MAKING A BELL
Most bells are made of bronze - an 80-20% combination of copper and tin. The bronze is melted and poured into various kinds of molds. The bell is removed from the mold and tuned. Bells may also be made from steel alloys, ceramic or even glass.

In case you ever have to inspect or describe a cast bell, these are the main parts: 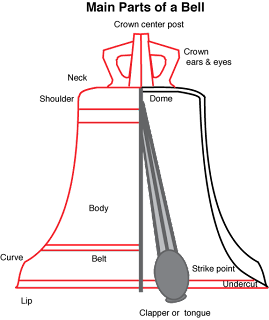 Here's a short description of how bells are cast in Russia.

SOUNDS
Cast metal bells are made in shapes and sizes that produce the best tone. A bell's ringing frequency varies in relation to the square of its thickness, and inversely with its diameter. The sound bow (thickest part of a bell) is often one thirteenth its diameter.

A bell's sound is composed of various tones, including the nominal note (what the bell is named after), the hum, and the second, tierce and quint partials. After a bell is cast at the foundry, elaborate  sound measuring equipment may be used for initial tuning. The final tweaks are done by hand by experts.

Calling bells are used to call people to dinner, summon servants, and so on.

Warning bells are employed to sound an alarm or warn of the approach of danger (closing gates at a railway crossing, for example).

Symphonic bells are specially formed to complement the sound of a symphony, and to produce tones that harmonize well with other instruments.

Decorative bells include this cute little ceramic bell I spotted while walking through our offices today. Jingle bells and sleigh bells are primarily decorative rather than functional. 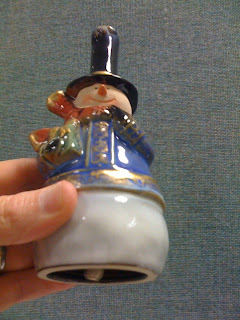 Here's a website that shows you all sorts of handbells.

If you like bell sounds, you could look for Brian Eno's album called Bell Studies for the Clock of the Long Now.

You can listen to the bells of Amersham, near where I used to live in England.

Or if you are really interested, you can go read the doctoral dissertation of Bill Hibbert, on bells. It's really fascinating.

This thesis quantifies how the pitch or strike note of a bell is determined by the frequencies of its partials. Bell pitch is more often generated in the listener's ear rather than being radiated out as a frequency from the bell. The exact pitch varies from the expected pitch by changes in the frequency of various partials. This can cause bells whose partials are tuned precisely (in theory), to sound out of tune to some people.

The pitch shifts were quantified at frequencies across the audible spectrum by experiments carried out on 30 subjects; these showed that partial amplitude does not significantly affect bell pitch. A simple model of pitch shift was devised from the test results which gave good agreement with the stretch tuning in a number of peals of bells.

A comprehensive investigation was done on over 2,000 bells with from a range of dates, weights and foundries. An unexpected, straightforward relationship was found between the frequencies of the upper partials which generate virtual pitches, which seems to apply to all bronze and steel bells of Western shape. The relative frequencies of these partials are determined by the thickness of the bell's wall near the rim. This relationship between the partials has not been previously reported, and explains previous failed attempts by bellfounders to tune these partials independently.

If you only know elementary school math you can still follow most of the discussion!
Posted by Excelmathmike at 3:01 PM