How do you quantify competence?

How can you measure the competence of a country compared to those around it?

In the USA, we pride ourselves on being the standard that others look up to - in areas like democracy, human rights, entrepreneurship, etc. We know how to make a buck!

France sees itself as the center of fashion, culture, etc. The British contributed jury trials, financial expertise, etc. The Swiss do chocolate, watches and trains that run on time. Each country has its own contributions to the global human endeavor.

Of course, not everyone agrees with us, or the French, British or Swiss. They may see their own country (or culture) as more valuable, more important, more idealistic.

The problem is that these national and cultural contributions can't be easily measured. They might be visible (more or less) but they are not quantifiable. How do you count influence?

Since this blog deals with understanding the world using only elementary level math, I wanted to deal with this political-social-economic question in a straightforward way. Today I read some material in the Financial Times newspaper that has helped me a great deal.

Here's a chart I constructed from the data they presented on China's economic impact on the world. We can see, by the numbers, what influence Chinese trade has. [Click the chart for a larger version] 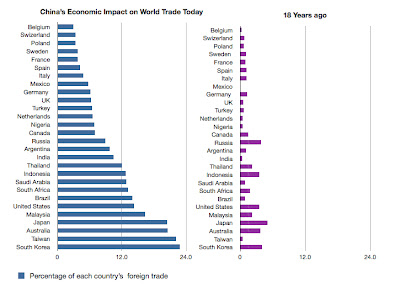 This chart displays China's percentage of foreign trade with each country. It includes both imports and exports for the 12 months from August 2009 - August 2010 (and 1992). The chart shows the top 28 countries.

When the same data is analyzed for 18 years ago, the most interdependent country was Japan at 5%.  The average country then had 1.6% of its trade with China.

This chart is an analysis is of current and past trading patterns. Looking ahead, China Development Bank, one of their top investing institutions, has made loans totalling $65 billion in the past two years, through offices in 150 countries. If you include all the other Chinese banks' activity around the world, China's total investment in developing countries may be $110 billion in two years. This investment will eventually pay off in the future.

These numbers suggest we are not the only country that knows how to make money!
Posted by Excelmathmike at 12:33 PM