Have you ever wondered where we got our decimal numbering system? The Roman Empire developed a system for numbering called the Roman numeral system, which we still see today in some copyright notices (1998 is MCMXCVIII) and on some watches and clocks.

The Roman numerals were not displaced until the 13th Century AD when Fibonacci published his Liber abaci, which means The Book of Calculations. This book showed the practicality of the new Arabic numbering system by applying it to bookkeeping, conversion of weights and measures, the calculation of interest, money-changing, and other everyday applications.


Fibonacci, or more correctly Leonardo da Pisa (also called Leonardo Bigollo), was born in Pisa, Italy in 1175. He was the son of a merchant who also served as a customs officer in North Africa. Fibonacci travelled widely in Barbary (Algeria) and was later sent on business trips to Egypt, Syria, Greece, Sicily and Provence.

In 1200 he returned to Pisa and used the knowledge he had gained on his travels to write Liber abaci in which he introduced the Latin-speaking world to the decimal number system. The first chapter of Part 1 begins:


"These are the nine figures of the Indians: 9 8 7 6 5 4 3 2 1. With these nine figures, and with this sign which in Arabic is called zephirum, any number can be written, as will be demonstrated."

Fibonacci is perhaps best known for a simple series of numbers, introduced in Liber abaci in 1202 and later named the Fibonacci sequence in his honor.

The series begins with 0 or 1. After that, use the simple rule: Add the last two numbers to get the next number in the sequence. See the series in action at thinkquest.org.

Fibonacci did not express his mathematics in the form of equations as we do today, but he did word them in such a way as to be easily translatable into modern equations. Here's an example from the Liber quadatorum [3, p. 4]:

"I thought about the origin of all square numbers and discovered that they arise out of the increasing sequence of odd numbers; for the unity is a square and from it is made the first square, namely 1; to unity is added 3, making the second square, namely 4, with root 2; if to the sum is added the third odd number, namely 5, the third square is created, namely 9, with root 3; and thus sums of square of consecutive odd numbers and a sequence of square always arise together";

this is readily translatable into the following set of equations [3, p4]

and suggests the general formula, which we would express as:

The best known work of Fibonacci concerns the Fibonacci numbers, first examined in the Liber abbaci through the rabbit problem:

A certain man put a pair of rabbits in a place surrounded on all sides by a wall. How many pairs of rabbits can be produced from that pair in a year (or n months) if it is supposed that every month each pair produces a new pair and the new pair from the second month on becomes productive. 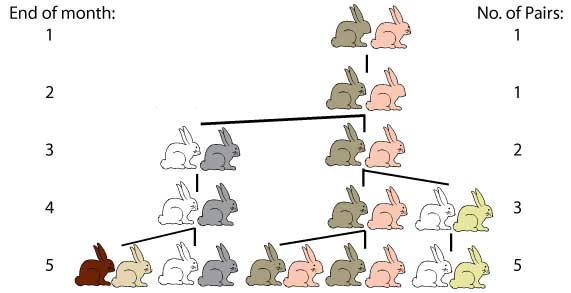 where the first two numbers of the series are 1 and 1 and each numbers afterwards is defined as the sum of the two previous terms, Fn=Fn-2+Fn-1. (Though in Fibonacci's sequence the first number was 1 and the second number was two, the first one was assumed.) Read more at plus.maths.org.

Imagine that there are xn pairs of rabbits after n months. The number of pairs in month n+1 will be xn (in this problem, rabbits never die) plus the number of new pairs born. But new pairs are only born to pairs at least 1 month old, so there will be


And this is the rule for generating the Fibonacci numbers. If you prefer to have someone else do the calculations, this Fibonacci Calculator calculates thousands of Fibonacci numbers exactly and millions upon millions to the first few digits!

Fibonacci mathematics is a constantly expanding branch of number theory, with more and more people being drawn into the complex subtleties of Fibonacci's legacy. Here's a fun comic strip featuring the Fibonacci sequence from Bill Amend at FoxTrot.com.

Mathematicians celebrate Fibonacci Day on November 23 or 11/23, taking the date from the first four numbers in the Fibonacci sequence shown above.

Excel Math is a proven method that gives students a solid foundation of elementary math. Excel Math Student Lesson Sheets are much more than just math worksheets. Using strategically placed spaced repetition, Excel Math gives you a proven approach to teach math concepts for long-term retention, with powerful features and advantages, including our proprietary Spiraling Strategy. Much like the Fibonacci spiral (which we'll visit in November), concepts are reintroduced on a regular basis (with our unique method of spaced repetition) so they become a part of the student's longterm memory. Read the amazing reports from teachers, parents, and principals around the country.

Learn more about how Excel Math can work for your students at excelmath.com. Excel Math is fully aligned to the Common Core and to state standards. Download correlations.

New to Excel Math? Learn how to get started.