The Answer is Blowin' in the Wind

Can you measure something that is always moving, never constant in speed or direction, and invisible?
That's the challenge of measuring the wind.

Scientists use an instrument called an anemometer. In 1450 Leon Battista Alberti, an Italian architect, mounted a hinged Plate up on a bracket and watched to see how far the wind would lift the plate. Over the next five centuries various types of moving blades were used.

The Robinson Cup Anemometer was developed in 1846. It had 4 cups that caught the wind and spun. Modern designs normally have 3 cups which makes the device more accurate. The cups move at 2-3 times the speed of the wind, depending upon the detailed design of the device. The Windmill Anemometer looks like its name, relying on a propeller spinning in the wind.

The Lind Tube Anemometer was completely different - a bent tube with liquid inside. The open end is pointed towards a wind source, and the other end indicates wind speed on a scale. This was refined by James Lind in 1775. Similar tube designs today are used because there are no moving parts out in the weather. The indicating end can move a needle that is safely inside a comfortable office.

There are other designs on the market now, using electronic sensors that derive the wind data from sonic or laser measuring. You can even buy a hand-held anemometer for less than $50. A Christmas present, perhaps?

Pressure occurs when a force is applied on a given surface area. The symbol of pressure is P.
Speed describes the rate at which an object travels a given distance. You can use the symbol S.

The trouble with using speed (or a related term, velocity) is that there is no visible object moving.

The wind is not like a car driving down the road. The wind is moving but it's still here, if you know what I mean. Plus, its direction and speed are always changing, so we tend to talk about the average wind speed, or force.

A sudden increase in the speed of the wind can be called a gust. Our government weather service decided a gust must be [going] at least 16 knots per hour, and more than 9 knots faster than the lull, or weaker winds. And to be a gust, the burst of wind must last less than 20 seconds. 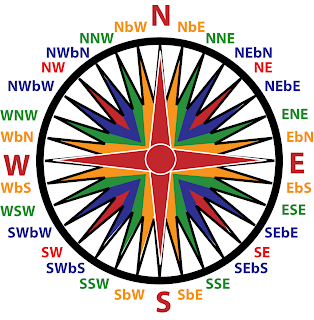 Speaking of direction, it's normal practice to describe where the wind is coming FROM rather than where the wind is headed. There are 32 points on this Compass Rose, and the directions are shown in colored letters. You would say Southeast by South, or North by Northeast, and so on.

Which raises the question: Do we refer to true North, or magnetic North when we describe the wind? In San Diego, the direction is off by about 10°. This is called magnetic variation or declination. I think on land we tend to ignore the magnetic variation, but if navigating at sea, it's important.

A British mariner and scientist named Beaufort refined a scale that described the wind's effects (what it is doing to the things we can see) and proposed that as the best means for talking about the wind. Dozens of books have been written on this subject, and hundreds of scientific papers. We'll tackle it another time.

Here's this morning's weather status map from the US weather service. There are lots of wind indications and warnings along the Pacific Coast. Notice the time is given in UTC, which is 8 hours later than our time in California. 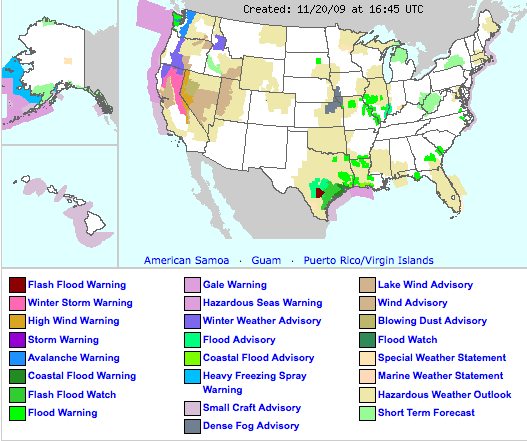 You may also like these articles:
Creating Electronic Math Flashcards
Thank You, Teachers!
May Day Math
Seven Steps to Successful Math Students (& Parents)
Posted by Excelmathmike at 8:50 AM