The MOST essential math tool

No, not a calculator or spreadsheet! It's a pencil.

This portable, light-weight, battery-free tool can draw a line about 35 miles long or write a full year's worth of Excel Math answers and can delete its own errors.

I noticed lots of pencils when I posted about putting Excel Math into electronic form. In virtually every video clip we have of students doing math, there are pencils. No one does math with a pen. It's assumed that you will make a few mistakes and have to erase what you did the first time. Even for grown-ups.

Maybe I should have said the most important tool is an eraser! But the two go together in most cases.

Why do we assume that we'll make mistakes and want to erase and fix them? I don't know.  But it's not just math where this attitude prevails.

My wife (a teacher) is quite adamant about cleaning up and correcting her work, especially when doing crossword puzzles.

THE NUTS AND BOLTS OF PENCILS
Pencils seem very simple. Wood wrapped around some grey stuff (lead?) that makes a mark on paper. But they're pretty complex. 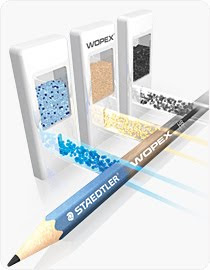 The pencil was developed and refined in Germany, over 400 years ago. Friedrich Staedtler was making pencils in Nuremburg in 1662. Hymen Lipman patented the world's first pencil with an attached eraser 150 years ago. (Even our great-great-great-grandfathers and mothers made mistakes.)

Most pencils are made from wood with a graphite core. If you have a few minutes, you can watch pencils being made.

Just this month Staedtler started selling a new wood plastic composite pencil. It's made from wood, plastic and graphite pellets, mixed into a dough and extruded out through a die, like a piece of pasta. They call it the Wopex.

Pencils are made all over the world, but there are now only two companies left in the United States that produce pencils with US wood in US factories. Does the fact that those companies are headed by people named Weissenborn and Berolzheimer indicate a German connection? Yah.

You can read more about them here, on the Timberlines Blog.

By the way, pencils don't have lead in them - they are filled with graphite and clay. And good ideas, just waiting to be written down.

Here's a fun video about those ideas.

Most of us just know about #2 pencils - what happened to #1 and #3? In a future blog we'll tackle how pencils are graded and rated.
Posted by Excelmathmike at 9:36 AM