Yesterday we talked about chocolate. Today we look at the intersection of food and money. Here's the question:

How MUCH do YOU spend on food? 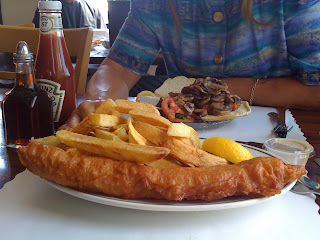 Fish and Chips
Do you keep track of every penny your family spends on food? We don't. I'm not sure how much we spend, although I am sure my wife could tell me what she buys and brings home. Each of us spends some money on food at work or school.

We had a little survey around Excel Math and most of us knew our weekly grocery spending, but not what the totals were for a month, including dining out, buying food gifts, food for the pantry, coffee, snacks, etc.

Most governments monitor how its citizens spend their funds on food. In some cases it's to ensure food assistance programs are adequately funded. With foods such as corn, they want to know how much goes to animals, becomes corn syrup, gets turned into ethanol, or is eaten directly by people.


USA FOOD NUMBERS
Here's one government report, from about 5 years ago. During this same time period, median household incomes varied from $35-60,000 (depending on the state).


The first row (in bold) is the total of everything below it. They totalled upwards, I guess they assumed we wouldn't read all the way to the bottom. The second row shows the expenditures on Food Away from Home, and Food At Home is the total of the food types shown beneath it.

As the note at the bottom indicates, the totals don't add exactly due to rounding at various stages of data collection. It looks like each of the columns is off by 2-3. How much variation in totals is normal, or acceptable? I don't know.

The miscellaneous row includes lots of items that are certainly part of the rows above - such as frozen dinners which are difficult to categorize but likely to contain both meat and vegetables.


INTERNATIONAL FOOD NUMBERS
On average, US families spend a bit less than 10% of their Private Consumption Expenditures on food. In the UK it's 11%, in France 16%, Italy 25%, etc. This little table shows the average values for food expenditures, as a percentage of family spending:

There are lots of political and economic consequences that flow outward from this state of inequality. But that's well beyond the scope of our blog today. 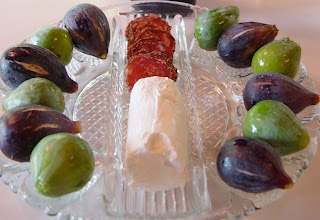 Figs and Cheese and Salami
MATH IMPLICATIONS
What have we learned so far? Food spending ranges from 10-55% of total family spending. The more money you have, the more you can spend on food, but there seems to be a limit - food spending does not increase infinitely.

We have to trust that we and our fellow citizens knew what we spent and fairly reported those expenses when asked about it. We trust that government agencies kept all the numbers in pristine condition - when the numbers were categorized, processed, summed, averaged and interpreted - nothing got lost.

We trust that the person who creates these tables gets the rows and columns right! (Or if there were errors, enough people worked at this subject separately that their errors were insignificant or obvious enough to get fixed).

These cautions hold true in ANY math endeavor you undertake.

I think it's fair to say the bigger the collection of numbers, the more carefully we must handle them and the more likely it is that they are untrustworthy. Statistics is the business of sorting out collections of numbers. We just barely touch on it in elementary school math. We're busy with other things... 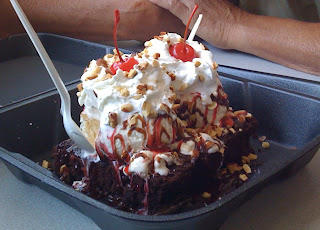 Brownies, Ice Cream, Nuts and Sauce, with a Cherry on top!
Posted by Excelmathmike at 9:52 AM