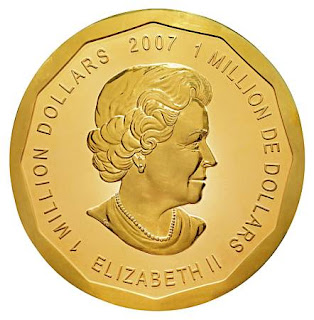 My wife and I saw that a gigantic gold coin sold this past week for $4,000,000. Queen Elizabeth II is on the face side of the coin, which was minted by a Canadian Mint a few years ago, in a limited issue of 5 specimens. Each weighs 100 kg.

This put me in a research mood, and I discovered some facts about the largest gold nugget ever found. It was discovered in Australia 140 years ago. It weighed 2520 troy ounces, but some of that was dross (non-gold stuff). The net gold in that nugget was 2284 troy ounces.

Here's a chance to employ our Excel Math.

Let's start with a conversion. There are 32 troy ounces in a kilogram.

Q1. Is the coin heavier or the nugget heavier? 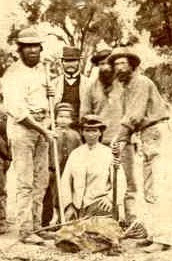 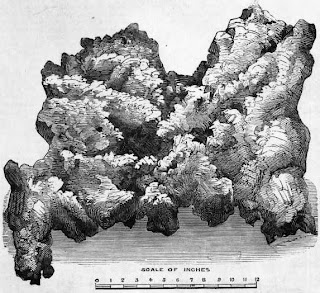 Here's a sketch of the nugget. It was more than 18 inches across according to this scale. And here's an early photo of the nugget, with some of the happy guys who found it.

Why am I doing this post on giant gold nuggets? Why not? Who doesn't like the thought of finding something fabulously valuable? My wife's great grandfather was a gold and silver mining engineer who worked for years in Mexico. There are plenty of nuggets floating around in her family. You can read his book if you like this sort of thing.

I have a copper nugget. Or maybe it's just copper slag (surplus) from a copper mine in Arizona. I'm not sure. But I can tell you it's heavy. We keep it on the front porch, and one night some kids tried to steal it. They got only about 3 feet before dropping it on the driveway, leaving some skin behind! 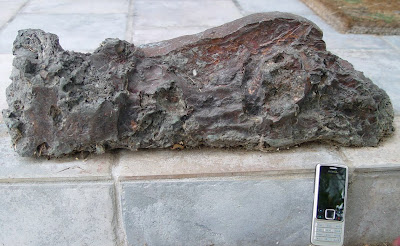 The tiles are a foot square, so I estimate this nugget is as wide as that largest gold nugget. I think it weighs about 150 lbs. Shall I try to weigh it? 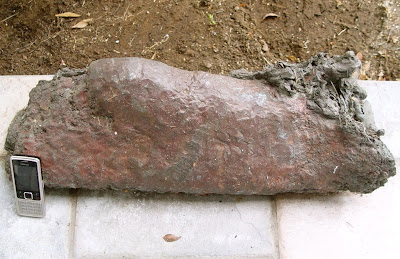 Q3. How much heavier than water is copper?
A3. Water weighs 1 gram per cubic centimeter, so copper is 8.9 times as heavy as water.
Posted by Excelmathmike at 2:31 PM