This week's posts on pallets forced me to learn a lot more about pallets than I had originally expected.

It turns out that most of the pallets we get from our printer are called skids. These have thicker supporting beams but no cross pieces underneath. Check the photo below. Pallets on the left with cross pieces, skids on the right without the cross pieces. 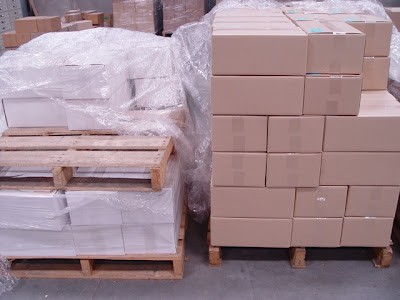 Printers use skids because they are easier to move around with a forklift. Printers' loads don't need so much lateral strength (from the cross pieces) as other loads do but they are very heavy so they need lots of vertical stability. 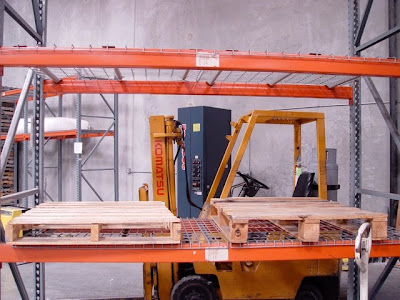 Here's another picture - pallet on the left, skid on the right. Notice the heavier wood blocks at the edge of the skid.

We return the skids to our printer. We buy pallets to send to our customers. We never get them back. Many companies do the same, while others keep control of their pallets. Here's the math:

A company called CHEP rents pallets and skids to people who move lots of goods. CHEP has 90% of the market for rental pallets, and owns an estimated 80 million pallets in the USA and 300 million worldwide! It's an interesting business.

The one big hitch is that CHEP has to have a sales department, provide the pallet to the user, find out where it went at the delivery end, get the pallet back, and take it to another user. There are lots of IT, inventory, transportation, repairs and other costs. They estimate payback on a pallet after 4.2 years - meaning for the next 9.1 years the pallet is profitable.
Posted by Excelmathmike at 10:19 AM