Double-butted when you spoke? Part I 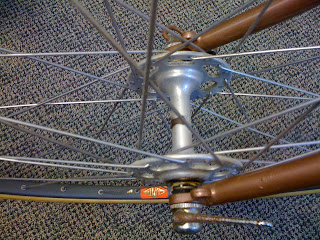 I apologize for the pun in the title of this blog. We are going to look at bicycle spokes today. 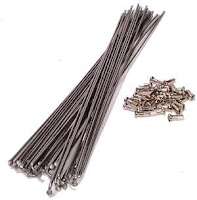 Here are some spokes and nipples. This handful is about the number you need for a single bicycle wheel. And here are the side views of each end of two kinds of spokes - the flattened aerodynamic type and the normal round style - and some nipples. 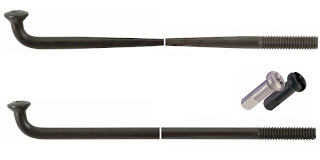 A butted spoke is thick on the ends and thinner in the middle. This saves weight, reduces drag and adds some flexibility to the wheel.
The aero spoke is flattened to reduce wind resistance. If it's too flat, it won't fit through the holes in the hub, so there's a limit to the flattening.

OK, I think that's enough background information. Now it's time to ask, "Do we need math to make a bicycle wheel?" Probably not, right? I haven't provided any numbers.

No, it turns out that you need a surprisingly large amount of math. Wheel (we will) look at the issues more closely tomorrow.

PS - I guess it's unfair to have NO numbers at all, so here - you've heard the phrase "let's not re-invent the wheel." Why not? Because everyone else is. I did a patent search and found 4668 patents on bicycle wheels!
Posted by Excelmathmike at 1:23 PM