This blog is usually about math taught in elementary school and how we might use it later in life. But we have an esoteric subject today.

Jules Henri Poincaré (1854-1912) was a great French scientists of the last century. He did creative research on mathematics, physics, and celestial-astronomical subjects. The Poincaré Conjecture has to do with spheres. He proposed that a three-dimensional sphere is the only "bounded space" with no holes in it. Proving this assertion was an extremely difficult problem that remained unresolved until 2003 when Russian mathematician Grigory Perelman published a proof (and turned down a million-dollar price for doing so).

The surface of a perfect globe is called a two-dimensional sphere. The globe has the property that a lasso of string (or rubber band, etc.) encircling it can be pulled tight to one spot. In the process, the lasso can slip along the surface and does not leave the surface at any time (for example, if it was going over a valley), nor cut off any part of the object (like a mountain). A Wikipedia illustration shows this:

On the surface of a doughnut, by contrast, a lasso passing through the hole in the center, or around the outer edge, cannot be shrunk to a single point without cutting through part of the doughnut or leaving the surface of the object. Another Wikipedia illustration I have enhanced shows two sample lines:

I'm not sure I fully understand this, but I'll try to build up a foundation for the Poincaré Conjecture:

A 1-dimensional sphere is a circle;
all points (x, y) that satisfy the equation x2 + y2 = radius2

(now we leave elementary geometry behind and boldly go where few have gone before ...)

Poincaré not only thought up this sort of thing, he surmised logically how these objects ought to behave. Grigory Perelman actually understood what he meant, and proved it to be true.

Speaking for the rest of us, it's hard to imagine these concepts. I would probably say something like "imaginary shapes could behave like tied balloons - they can be a sphere, then become a sausage, then a cute dog." Not very mathematical, am I? Some art by Michael Floyd easily illustrates my concept: 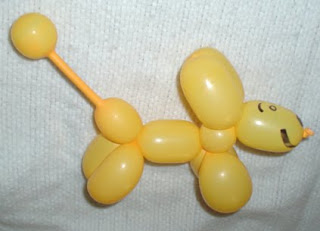 Here is a real-word summary of the Poincaré Conjecture by a noted post-doctoral researcher :

From here on out we'll stick to elementary subjects, ok?
Posted by Excelmathmike at 10:56 AM