Today we will look at the mathematics of land-locked-ness (not to be confused with Scot-land's Loch Ness, shown below). 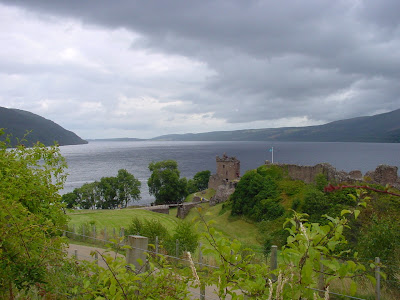 I covered some elements of this topic in a post last year.

Most countries have borders that separate them from adjoining nations, as well as direct access to navigable deep water (seas, oceans, large rivers, lakes and canals). That allows them to import/export goods just by crossing their own borders.

Land-locked nations are those countries that have to go across the land mass of an adjoining country in order to get to the water. According to Wikipedia, there are currently 47 landlocked countries. Other sources show 44 countries. Some nations are landlocked during certain parts of the year, when their ports are closed by ice or inclement weather.

(You might call an island nation water-locked, as it is completely surrounded by water.)

Two countries are double-land-locked - Lichtenstein and Uzbekistan. They have to cross two borders to get to an ocean.

Three countries are completely landlocked by one single country – that is they are situated within and surrounded on all sides by just one country. These countries are called enclaves:
The last of these, the Kingdom of Lesotho, has a population of about 2,000,000 people. One of them visited our math blog this week. Welcome!

NOTE: Lesotho is not that far from Reunion Island, east of Madagascar. Someone from Reunion visited us last week. 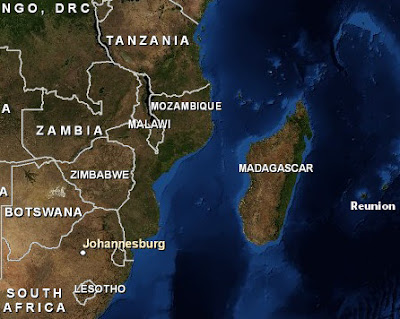 Here are a few math facts and figures about Lesotho:
This topographical map shows the mountainous terrain of Lesotho, and its distance to the port town of Durban, South Africa. 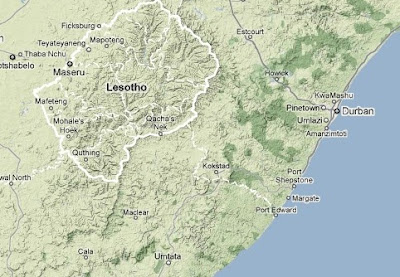 Due to the shared needs of landlocked nations, there is a special United Nations group to represent them. It's known as The Office of the High Representative for the Least Developed Countries, Landlocked Developing Countries and the Small Island Developing States.
Posted by Excelmathmike at 9:52 AM