Littoral means the shoreline (plus some distance above it and below it). Now imagine a country, next to a large body of water -  we say it possesses littoral territory.

But how much territory? How far out into the water can the country claim ownership? The so-called Territorial Waters. When you go outside these waters you are on The High Seas.

We talked about territorial waters months ago in a blog, where I told you that technically a ship in territorial waters should set its clocks to match the time in the country that claimed the water. When you are on the high seas you can more or less do what you like. But if you commit a crime like piracy, ANY nation can come after you.

Pirates and slave ships on the high seas can be targeted by any nation's navy, under the legal doctrine of Hostis humani generis which means "enemy of mankind."

This concept of territory became a topic of interest in San Diego 30-40 years ago when we had  a large tuna-fishing industry. As countries along the South American coast began to claim fishing rights to the water out 200 miles, it restricted where our fishermen could hunt. And it has caused a few international incidents.

Under United Nations treaties, territorial waters extend a maximum of 12 miles from the mean low tide line of the adjoining shore. This ownership applies to waters BELOW the surface and to the airspace ABOVE the surface. Here's a diagram from Wikipedia to show you what I mean. 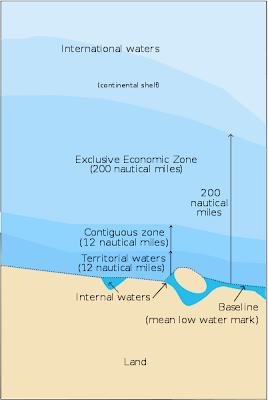 You can see that like littoral zones, there are many fine distinctions about a country's waters - internal, territorial, contiguous, exclusive economic, international, etc.

But maybe this means nothing to you, because you live in one of the 44 land-locked countries. That means you have no direct access to the sea. You have no fishing rights. You have to bring in goods by plane or be subject to tariffs imposed by your neighbors.

Doubly-landlocked countries have at least two borders to cross before they can get to the beach! Only Lichtenstein and Uzbekistan have that problem. San Marino and the Vatican are both completely surrounded by Italy and only have that one route (cross Italy) to get to a body of water.

You might think that the USA has only Mexico and Canada as neighboring countries. That's true if you only count "land" neighbors. But 21 countries are considered to be our water neighbors.

Who are your nearest neighbors? Go here to find out.

Assuming your country isn't landlocked, how much coastline does your country have? That's another problem, and we'll save it for next week.

Here's are some startling facts - Canada has 10 times the coastline of the United States, even though the area of Canada is only 10% bigger than the USA.

Final fact  - Norway has more coastline that the USA, even though it's only 1/30th the land area.

Posted by Excelmathmike at 3:28 PM