The whites of their eyes

It's Friday, and this is the last of my blogs on famous phrases and math.

Prescott said in his battle report that they engaged at 30 yards. Others have put the distance at 10 yards. Still others have said the distance was irrelevant as long as they didn't miss a shot.

Hollywood producers know the importance of the right distance; a battle filmed without the enemy in view is pretty boring. Great whites of their eyes were provided in the spaghetti westerns of Sergio Leone!

For example, this view shows the whole scene, but is clearly too far back:

This is the right distance to see the whites of their eyes:

The same holds true in space battles (as this article makes clear). How entertaining would it be for a Klingon battle cruiser to fire when it's two galaxies away? You want to see everything on one screen: 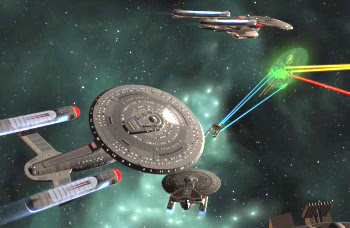 Despite these movie portrayals, in real life we are seeing less of the whites of other people's eyes.
If you feel the need for a few more numbers than I've provided today, examine these facts:

I have been unable to ascertain the percentage of luminous transmittance that allows the whites of their eyes to be seen.

Posted by Excelmathmike at 1:36 PM