More for Less or Less for More

Which will it be? How do we make a decision to buy?


A larger package (more) for a cheaper price (less)?
OR
A smaller package (less) for a higher price (more)?
You might say "a larger package at a lower price is always a better deal" to which I can reply "not always." I suspect that the older you are and the more purchases you have made in your life (or steaks you have eaten), the more likely you are to agree that the answer is "it depends."
Costco has a giant warehouse just down the street from Excel Math. Their strategy is "best value at the best price". Isn't value by definition a good price? If not, what is value? Is the Costco slogan redundant?  As you might suspect there are many opinions about value. Those who think long and hard about it are called economists. They formalize their opinions in economic theories:
Intrinsic value says the price of goods and services is not a function of subjective judgement, but the object's or service's value is contained within itself. The process of producing an item, and the costs involved in creation and delivery to customers are related to the intrinsic value.
Labor value says that the real price of everything is the work and difficulty of getting it. An item's value - when one buys, or disposes of, or exchanges it  - is the toil and trouble which it can save (the owner) or impose (on others). [Adam Smith and Karl Marx are famous for investigating this definition of value]. A shovel makes it easier to dig a hole than using one's fingers, so it is worth something to a gardener.

AN EXAMPLE: Our state has a 10 cent deposit on many kinds of bottles. Soda and beer bottles require a deposit, but pickle jars do not. I make a personal judgement on the trouble involved in taking a bottle back to get that dime. I would rather drop them in our blue bin and let the city pick them up, or leave them for others to pick up. This opinion is not shared by my wife, who is happy to sort them, store them, and take them back in for the money.
Subjective value suggests that an object's value (a price greater than zero) is determined by its utility at satisfying human desires. In addition, it must be in limited supply. People must want an item enough to pay more for it than someone else. An item may be able to satisfy the wants of one person more than another person. It may be useless to one person or very useful to another.


AN EXAMPLE: To paraphrase Adam Smith - Nothing is more useful than water to a thirsty person: but you can't really buy anything with a cup of water, or exchange it for anything. A diamond, on the contrary, has hardly any "useful" value, but you can trade one for all sorts of other goods.
Value can vary depending upon whether you plan to use the item yourself, or swap it for something else. Value can vary if consumers are using credit rather than cash - they tend to buy more with credit and may pay more for the same item. Values may go up during a natural disaster or during a "fad".

AN LESSON IN VARIABLE VALUE: A table made of heavy wood, painted carefully, was discarded by an apartment tenant who could no longer use or transport it. The table was harvested by a "waste-not, want-not" maintenance man whose acquisition cost was minimal - just throw it in his truck. After considering the long-term cost to his family by keeping the table (more clutter in his already-over-crowded house) he carried it to the curb. We (having a much larger yard) were happy to reclaim it. Our cost was carrying it 10 houses down the street. 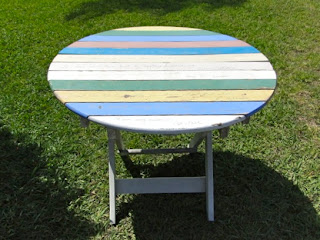 When we talked to the neighbor - to be sure we could take it, he said "Yes, I got from an apartment I was cleaning out" He added, "Someone sure went to a lot of trouble to make that nice table and paint it!" and "I don't really like it or have room for it". After only a day, the value had dropped to zero.

If we don't feel inspired by the sayings written on it, and the eccentric sequence of colored boards, I'll repaint it. My cost will go up by the time and energy we expend on the table. Eventually we will get tired of it and put it back out on the sidewalk ...
Posted by Excelmathmike at 3:21 PM