Malapropisms to the Max 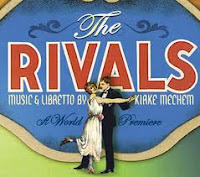 In his hysterically funny comedy, The Rivals, Richard Brinsley Sheridan brings to life a character named "Mrs. Malaprop," who mangles the English language with panache. Through all five acts, Mrs. Malaprop gets completely mixed up in her use of words and language. Instead of saying, "contiguous countries," she describes them as "contagious countries."

At another point in the play she  gushes, "He is the very pineapple of politeness!" when she means pinnacle. She later exclaims, "Why, murder's the matter! slaughter's the matter! killing's the matter! — but he can tell you the perpendiculars" (instead of particulars), and the laughs continue throughout the play. The word "malapropism" was coined in 1949 from this comedic character who first appeared in 1775. Read more malapropisms.

My parents, with completely straight faces, would purposely include malapropisms in their daily conversation. For example, when I said I had had a feeling things would turn out in the way they actually did, my mom's response would be "you must be psychotic." So I suppose it's fitting that my husband has managed to make up a few malapropisms of his own. When he wants to spice up his meal, he'll ask for more "canine pepper" instead of cayenne. And when we're preparing condiments for dinner, he'll ask for another "mannequin" instead of a ramekin to hold the chopped veggies.

A friend of mine had a coworker who was dubbed "king of malapropisms" in their company. The friend's  name was Joe, so these became known as "Joe-isms." One of his quotes was, "money is no expense." Another favorite was, "my life passed right between my eyes." After returning from a cruise, he was asked how he liked it. To which his wife replied (imitating his love for malapropisms), "He liked the uninhibited islands the best!" 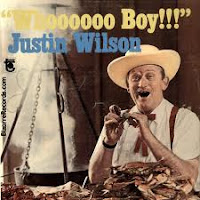 Justin Wilson (1914-2001), Cajun chef and humorist from New Orleans is known for his malapropisms, his mixed-up use of language, and his drawn-out cajun drawl, "I Gar-on-tee!" You can listen to him saying, "How ya'll are?" and view photos at JustinWilson.com. One of my favorite stories told by Justin Wilson with his thick Cajun accent was his tale of visiting a southern college and seeing the boys and girls matriculating together! He was astounded. But that wasn't the worst part. They actually did it in public! 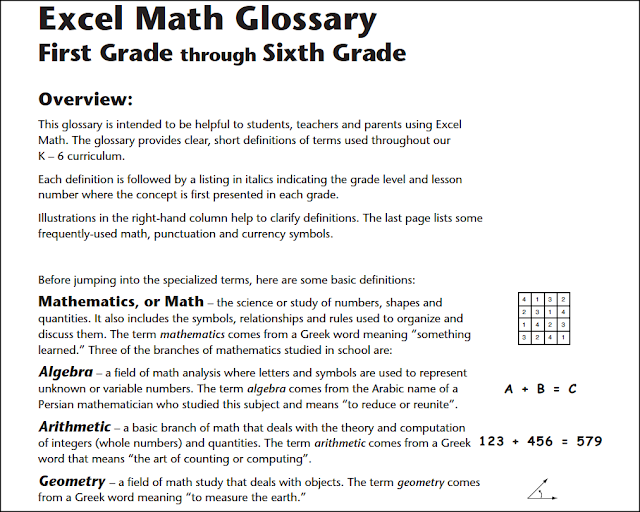 The Excel Math Glossary contains:
The Spanish glossary includes the math words in both English and Spanish, with full definitions in Spanish for parents.

Our goal with the glossary is to provide clear, short definitions of terms used throughout the Excel Math curriculum. We want students (and parents) to understand the words used in the math lessons as they learn (and review) mathematical concepts. Read more about arithmetical words.

Children are especially creative when it comes to adapting language to fit their own points of view. They are also quite adept at improvising when unsure of the correct words to use. One child learning the Pledge of Allegiance, got off to a fine start, but then came up with his own version: "I pledge allegiance to the flag of the United States of America, and to the republic of Richard Sands..." Another child, named Laurie, sang the chorus for the Battle Hymn of the Republic with great gusto, "Laurie, Laurie hallelujah," until she found out it wasn't really about her, and the word should have been glory. A student returning to school after an injury explained to his classmates, "I had a fraction in my arm and had to go to the hospital!"

Do you have some favorite malapropisms or interesting ways your students or friends have misused language? Just leave a comment to share one of your favorites.
Posted by Unknown at 5:00 AM