Amicable Numbers: Can't We All Get Along?

The dictionary defines amicable as "having a spirit of friendliness." It comes from the Latin word amicus, meaning "friend."

Mathematicians say that two positive integers are amicable or friendly if each of them is equal to the sum of all the proper divisors of the other, including 1. Proper or aliquot divisors are all the positive divisors of a number, excluding the number itself. The numbers 220 and 284 are called amicable.

Take a look at the proper divisors of these two numbers:

The amicable numbers were thought by mystics to possess magical powers. Astrologers used these numbers for preparing talismans and horoscopes. They believed that amicable numbers had the power to create special ties between individuals. They also saw these number pairs as symbols of friendship.


Read more on the MathForum.org.

For over a thousand years, only this first pair (220 and 284) was known. It was attributed to the philosopher Iamblichus (c.250-330), who credited Pythagoras. Eventually, the mystical quality of amicable numbers caused them to be studied more carefully by number theorists.

Then, in 1747, Leonhard Euler published a short paper [E100] mentioning the technique that Descartes and Fermat had used, and listing 30 amicable pairs, including the three already known, and including one “pair” that was not actually amicable. 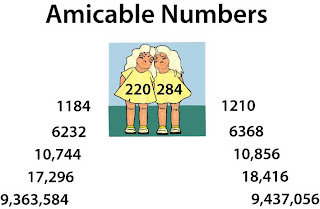 Pythagoras when asked, "What is a friend?" replied that a friend is one "who is the other I" such as 220 and 284. The numbers 220 and 284 form the smallest pair of amicable numbers (also known as friendly numbers) known to Pythagoras.

Amicable numbers serve no practical purpose, but professionals and amateurs alike have enjoyed uncovering them and exploring their properties. This chart lists all amicable pairs under 1014. 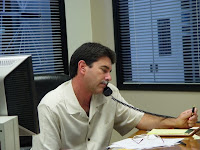 
New to Excel Math? Learn more on our website www.excelmath.com. Watch this video to see how Excel Math works:

Visit our website for more videos and resources: www.excelmath.com.
Posted by Unknown at 4:10 PM