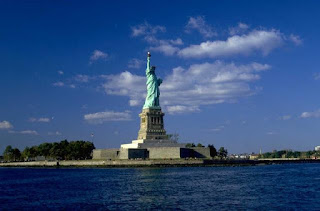 On June 17, 1885, the dismantled Statue of Liberty arrived in New York Harbor. It had been shipped across the Atlantic Ocean in 350 individual pieces packed in more than 200 cases as a gift of friendship from the people of France to the people of America.

The copper and iron statue was reassembled and dedicated the following year in a ceremony presided over by U.S. President Grover Cleveland.

The lady holding aloft the flaming torch became known around the world as an enduring symbol of freedom and democracy.

Intended to commemorate the American Revolution and a century of friendship between the U.S. and France, the statue was designed by French sculptor Frederic-Auguste Bartholdi (who modeled it after his own mother), with assistance from engineer Gustave Eiffel, who later developed the iconic tower in Paris bearing his name.

The statue was initially scheduled to be finished by 1876, the 100th anniversary of America’s Declaration of Independence; however, fundraising efforts, which included auctions, a lottery and boxing matches, took longer than anticipated, both in Europe and the U.S., where the statue’s pedestal was to be financed and constructed.

The Mint Act of 1792, which created the United States Mint, specified that certain design features appear on legal tender coins, including the quarter. One side of the coin had to include the year in which it was minted, an image that symbolized liberty and the inscription LIBERTY. The reverse (tails) of the quarter featured an eagle and the inscription UNITED STATES OF AMERICA. In 1932, the 200th anniversary of Washington's birthday, a profile of President George Washington's head replaced Lady Liberty.

The Statue of Liberty coin was first struck on October 18, 1985 with production continuing through 1986.

The design of the coin features the Statue of Liberty and Ellis Island.

The coin is inscribed: Ellis Island Gateway to America, Liberty, In God We Trust, and 1986.

The reverse of the Statue of Liberty coin (shown below) features a design of Liberty's torch and inscriptions.

The coin is inscribed: United States of America, Give Me Your Tired, Your Poor, Your Huddled Masses Learning to Breathe Free, E Pluribus Unum, and One Dollar.

In Excel Math, students get lots of practice counting coins and calculating money amounts.
New to Excel Math?
Visit our website at www.excelmath.com for samples.

For 40 years, Excel Math has been building student confidence and success with math. Have an Excel Math story to share? Send us your story using the Comments box below. We love hearing from parents, teachers and students around the country!