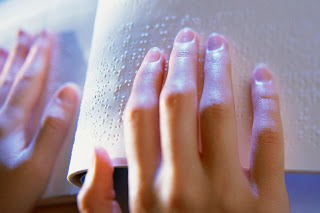 Saturday, January 4 marks the 205th anniversary of Braille's birthday. Louis Braille was the inventor of braille, a system of reading and writing used by people who are blind or visually impaired.

Excel Math is available in braille and in large print editions through the Library of Congress.

On January 4, 1809 Louis Braille was born in Coupvray, a village 25 miles east of Paris in north central France. As a small child he was blinded. He developed his raised dot method of reading and writing while still in his teens and referred to it as "my alphabet."

In 2009 the United States Mint released the Braille Bicentennial silver dollar to commemorate the 100th anniversary of Braille's death. The obverse of this coin features a portrait of Louis Braille (show below). The reverse shows a child reading a book in Braille with the word “Braille” (abbreviated BRL in Braille code) above him. The word INDEPENDENCE is featured on a bookshelf behind the child. 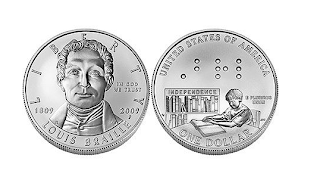 In 1952 on the 100th anniversary of his death, Braille's body was exhumed. Watch the historic footage as the people of Paris celebrated the 100th Anniversary of Louis Braille's passing: http://www.criticalpast.com/video/65675029292_100th-Anniversary-of-Louis-Braille_Brailles-remains_Pantheon_Vincent-Auriol

Braille's remains were being transferred from Coupvray to the Panthéon in Paris. Thousands of blind people joined the rally. The President of France, Vincent Auriol, and other dignitaries paid their final tribute to Louis Braille.

Math Bulletin Board: Gifts of the Season

Coordinate Grids for the Holidays

Excel Math is fully aligned to the Common Core and to state standards. Download correlations.

Excel Math can help students stay on top of their math skills and get ready for spring testing.

Some parents purchase the Excel Math Intersession Edition (at just $6.95 per student) to give their students extra review and practice in the new year. This six-week product is a great way to help students build confidence and refresh their math skills before assessments.
Posted by Unknown at 10:40 PM