When I asked, How high? I didn't originally mean the price.

A couple days ago I did a blog about ship canals in the UK. With minimal mention of math.

Today we're talking about the Panama Canal, using numbers in every sentence from here on out!

This 48-mile waterway cuts through Central America, allowing ships to sail through rather than having to sail around South America. It cuts 8,000 miles off a ship's journey from New York to San Francisco.

The first mention of a trans-oceanic canal was in 1534, when a plan was proposed by the Kings of England and Spain. At least a dozen schemes were attempted to provide a canal, road or railroad but were defeated by the terrain and inhospitable conditions. The first railway was completed in 1855.

The French made a valiant attempt in 1880 to cut a canal, but gave up after 15 years when more than 22,000 men had died of malaria and other tropical diseases. About 10 years later the US bought out the French effort and started its own project that ultimately cost more than 5600 lives. The canal was completed and opened on August 15, 1914.

The 5-mile-wide Canal Zone was under the control of the United States beginning in 1903 but we returned partial control 30 years ago, and left entirely about 10 years ago, in 1999.

The Canal's locks are currently 110 feet wide, 1000 feet long and 40 feet deep. It's apparent they are no longer large enough, as about 33% of the cargo ships in the world won't fit (a ship that just fits is called Panamax).

A Panamanian vote in 2006 approved a new project to widen and lengthen the canal locks so larger ships can go through the canal. The new locks will be 180 feet wide, 1400 feet long, and 50 feet deep.

The toll for one ship to go through the canal is calculated in a complex manner, considering its size, its container capacity (or number of beds) and the percentage of its capacity that is full (beds occupied). In 2009 the toll was raised to $72 per container, and $120 for a full berth and $92 for an empty one.

The largest ships now pay about $320,000 for each one-way trip. The lowest toll ever was $0.36, paid by adventurer Richard Halliburton, who swam through the canal in 1928. 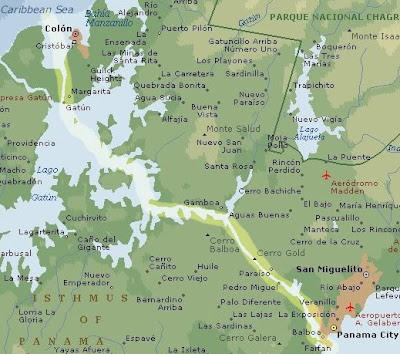