A month or so ago we talked about roads.  Today we talk about a lack of roads - or small gaps where roads ought to be.

We could call them missing-pieces-of-roads. But pothole is the word we normally use.

Potholes are problems. Nobody likes them. They appear everywhere, even in NASCAR's Daytona 500. The race was stopped twice last week because of potholes! 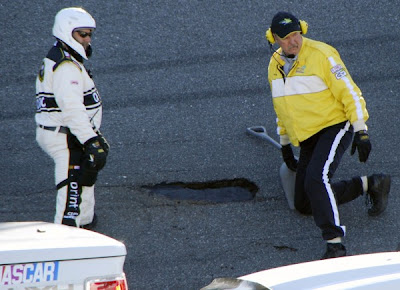 How many potholes per mile is that? Just about 11.

How many potholes per mile is that? About 18.9.

Although the city says they have 64 people dedicated to fixing potholes, they can't keep up.

The streets division has created a web application so you can locate a pothole on a map and send its coordinates right to the patching crews. That's faster than relying on the crews to find it visually.

I must say the repairs don't seem to be evenly distributed, but then I live in an older part of town. The city says it divides the repair funds evenly among the 8 major districts of the city. If it's true that newer roads are in better condition, then newer neighborhoods can spend more to fix fewer potholes.

It's not the bad weather ruining our roads, because we have great weather. So what is it? Do we drive too hard? Do our cars and trucks weigh too much? Is the hot sun ruining the asphalt? At least we have fewer than Tijuana, which estimates its pothole population at 800,000!! 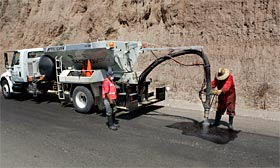 Posted by Excelmathmike at 9:10 AM