Some of us will know what Parlez-vous français? means. It's Do you speak French? In French.

Today's blog title is prompted by the Tour de France every morning. The commentary is in English, but there's plenty of French being spoken (and seen) on the show. We are traveling through France along with the bicycle racers, and we are about to come up on Bastille Day tomorrow. 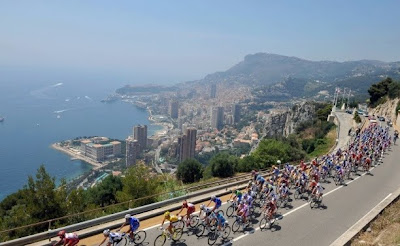 I don't speak French very well. I have traveled a lot in France - visiting at least 15-20 times for business and pleasure. I can read fairly well and communicate if I have to - especially about food, cars, and bicycles. But this modest level of competence came at a price. On my first visit I went for weeks not being able to read or speak without serious concentration. My brain was constantly tired.

What does this have to do with math? you ask. This - if you think of math as a language, most of us are in the same position I am with French. We can communicate just a little. We might be able to fool a few people once in awhile. But then we come across REAL MATH language. For example:

Ok, maybe that wasn't so hard. How about this passage:

Is this math or gibberish? In any case, it scares us. I present this argument from Jonathan Hayward, a doctoral mathematics graduate/geek:


Most people are taught something horrid as basic math and they later avoid it as much as they can. They don't know what most mathematicians really do is enjoy an art form guided by intuition. Most people think mathematicians must do more of whatever they suffered through in math classes. It's really sad because higher math is easier than lower math!
This author makes the argument that higher math is fun! It's exercising an art form guided by intuition. Here are some mathematicians from MIT. Do they look like they might enjoy math, like these conjectures? 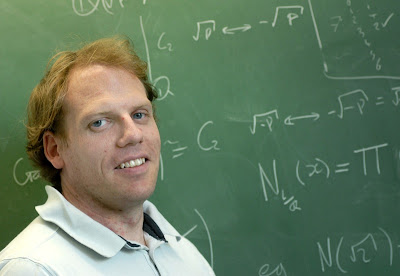 For which whole numbers n does there exist a square a2 so that a2-n and a2+n are also squares?

I say, let's stop here, I'm getting a headache. (Why are these guys so often next to a chalk board?)
Posted by Excelmathmike at 11:42 AM