Division is an interesting math operation in that it can be displayed in many different ways.

Here are 4 of the most common ways to use numeric symbols to represent 369.963 divided by 3.  (Because I chose these numbers carefully, I will eventually get a pleasing quotient of 123.321 with no remainder.)

Of course, as shown below in the paragraph, you can also depict this operation in text:

You can depict the same thing graphically. Here is a rectangle 369.963 units wide, and beneath it are three smaller pieces, each of which is 123.321 wide. In this case, I was able to create them on my drawing system, so I know each of the units is an even third of the original. Does it help you imagine the task at hand?

Or to make it interesting, we might create a picture that incorporates this division problem into a story: 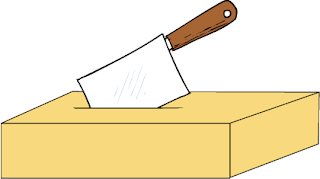 We could portray the same thing using tangible items - that is, blocks, or sticks, or things like that. Things you can touch and manipulate, not just see on the screen or page.

Alternatively we could use different media. I could announce to you verbally what the assignment is. Although it seems similar, the spoken word is not the same as the written word, especially if you can't read well. Or if you are deaf, or blind.

All of these methods of representation allow the user to interact with the values 3 and 369.963 in order to do the division, or repeated subtraction. They take an abstraction or an actual event, and portray it in a useful way.

Some representations are easier to create than others. The numbers are easy enough to type, but putting them into a division box takes more work. Generating the division symbol with a pair of dots above and below a hyphen (  ÷  ) is also a bit of effort on most computers because it does not appear on the keyboard.

Use the form that suits you best. We try to vary our presentation in Excel Math, so kids of all types have many chances to succeed at learning to divide.
Posted by Excelmathmike at 7:58 AM