When is one not one? Part III

The last two days we have investigated words that mean more than one item, even if the word itself has a singular form (pair, dozen). These wacky words undermine our perfectly logical concepts of plurality (more than one) and singularity (one).

Our assumption or expectation, in English is that the average noun is singular. It's the norm for a word to mean one. A bird is one bird. A bee is one bee. We change that base word to express plurality.
Some words keep their same form - for example, a sheep, one sheep, two sheep, three sheep.

English is an irregular language with many rule-breaking exceptions, so you constantly run across examples like cactus (plural is cacti), forum (plural is fora) or lotus (is the plural loti or lotuses?)

Other languages have their own rules.

In English (Spanish, Portuguese, Italian, etc.) we refer to one as singular, but zero and whole numbers greater than one are plural.

He has zero or no cars, he has one car, he has two cars.

While, in French and some other languages, zero is singular, not plural.

Can you see the complexity of teaching number sense and plurality to a group of English-as-second-language students from different countries?

I talked to a Frenchman once who had spent a year in a ESL class in Los Angeles when he was young. He didn't learn much English or math, but he said he's still fluent in street-Spanish ...

Not only do ESL students have to learn the language, but they have to learn our crazy rules regarding plurality, which affect how we talk about numbers and hence how we do math.

Remember the exception yesterday? A forest fire plus a brush fire are two separate fires. But if they come together we then have just one fire again.

Here are some exceptions for today:

Did you know opera is the plural form of opus? And although you can see graffiti around on buildings, you'll probably never see a graffito? 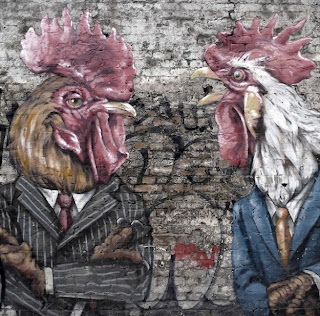 Photo taken by Small Luxury World
Posted by Excelmathmike at 9:26 AM