Whose Head Is on That Coin?

Can you name the presidents on the dollar bills? How about on coins?

In Excel Math, we teach students how to add dollars and coins and make sense of monetary calculations. Pictured below is a Guided Practice page from the Excel Math Second Grade Teacher's Edition. See if you can solve these problems without looking at the answers. Section E uses coins of various values. Can you recognize them? (We've provided the answers so you can check your work.)

Now back to coins. In 1900 George Washington was first commemorated on a U.S. Mint dollar coin along with the Marquis de Lafayette (all of the United States coin and currency images pictured here are from the United States Mint): 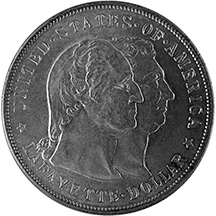 Born in 1757 to wealth and privilege, at the age of twenty the Marquis de Lafayette sacrificed everything to support the American revolutionary cause. Lafayette’s Revolutionary War heroism and his efforts to get the French government to sign a treaty of alliance with the colonies in 1778 earned him fame and respect on both sides of the Atlantic. In 1784, the State of Maryland bestowed citizenship upon Lafayette and his descendants.

In 1824, while on a tour of the United States accompanied by his son George Washington Lafayette, Congress awarded LaFayette land in Florida and $200,000 in cash. The next year, LaFayette returned to Virginia and presented the Masonic Lodge in Alexandria with a 10-inch long key to the Bastille. In 1790, LaFayette sent George Washington a second key to the Bastille, which is on display at Mt. Vernon. Here is the reverse of the coin pictured above. It depicts a statue of LaFayette on horseback. The inscription reads, Erected by the Youth of the United States in Honor of Gen Lafayette Paris 1900: 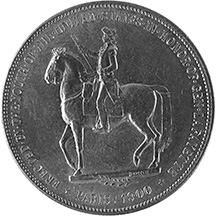 The Mint Act of 1792, which created the United States Mint, specified that certain design features appear on legal tender coins, including the quarter. One side of the coin had to include the year in which it was minted, an image that symbolized liberty and the inscription LIBERTY. The reverse (tails) of the quarter featured an eagle and the inscription UNITED STATES OF AMERICA.

In 1932, the 200th anniversary of Washington's birthday, a profile of President George Washington's head replaced Lady Liberty. To celebrate the Bicentennial in 1976, a colonial drummer replaced the eagle on the reverse. In 1999 the quarter's reverse underwent its first of 50 changes under the 50 State Quarters® Program to honor each state. Here are some of those state quarters. George Washington's profile appears on the obverse or heads side: 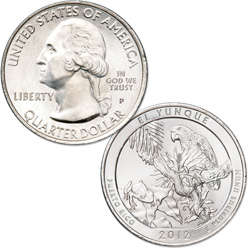 Laura Gardin Fraser (1899-1966) became the first woman to have her design appear on a commemorative coin when she designed the obverse of the 1921 Alabama Centennial Half Dollar picturing William Wyatt Bibb, the first governor of Alabama, and Thomas E. Kilby, the then-current governor:

In 1931, Congress held a competition for a coin to honor the 200th anniversary of George Washington's birth. Ms. Gardin Fraser submitted a design that, though popular, was not chosen. Her design, however, was revived for the five dollar gold coin 68 years later, in 1999: There are even coins honoring the spouses of Presidents:

We may be most familiar with the one dollar bill depicting George Washington in the center: 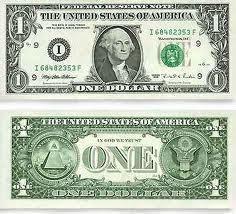 Thomas Jefferson's image also appears on various coins. Do you recall which ones?
Here are two of them: