Yesterday we looked at the percentage of water that makes up each of the states in the U.S. (See Water, Water Everywhere, Part I.) Today we'll see how our water use has changed as the population of the United States has grown.

Since 1950, the U.S. Geological Survey (USGS) has collected data on amounts of water used in homes, businesses, industries, and on farms throughout the United States. Water-use data are collected every five years. The USGS has compiled the data so we can see how our water use in the United States has changed over the past 50-plus years.
In Excel Math, we teach children how to measure and compare data using tables and charts. Here's a chart from the 5th Grade Student Lesson sheets (see Section E) comparing the number of books read over three months by three different children: 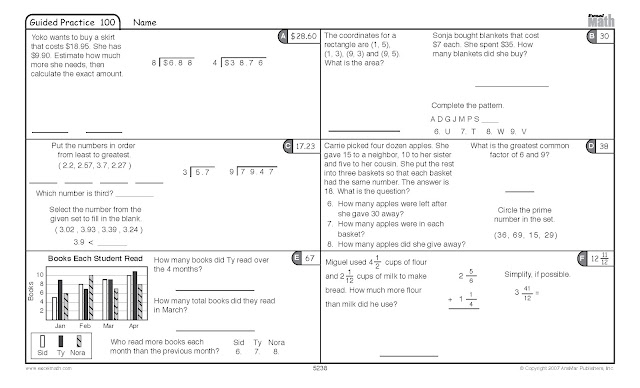 Thanks to changes in technology, in State and Federal laws, in economic factors, and in water conservation, we are more efficient in our use of the water from the Nation's rivers, lakes, reservoirs, and aquifers. So even as the population grew, our use of water has become more efficient and our water consumption has remained relatively stable over the past 30 years.
Estimates of water use for the year 2000 indicate that about 408 billion gallons per day were withdrawn for all uses during the year. This total has varied less than 3 percent since 1985. Since then, withdrawals of water have stabilized for thermoelectric power and irrigation—the two largest uses.
Many of the stresses for greater water use have risen since 1980—population, the need to grow more food (irrigation), more industry, etc, but total water use has not risen. Water conservation and using water more efficiently have had a positive effect over the last 30 years.

Until then, dive in...the water's waiting!