Everyone knows what a circle is. Yesterday we defined squares. Today, triangles.

A triangle is another polygon, a planar figure with three sides.

Three is the fewest sides that a polygon can have, because you can't make an enclosed shape with only one or two straight lines. Does that mean that triangles are simple? Is class over? Can we go home?

Not yet. We get to learn plenty of new words today.

Triangles can be similar if they have the same angles but are different sizes. Triangles may be called congruent if they are identical in every way, including size.

There are plenty of other characteristics of triangles. We don't have time to mention them all. This graphic shows some of them. 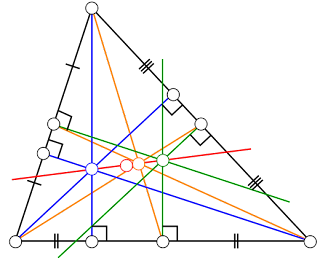 The orange lines go from a vertex to the center of the opposite side.

The blue lines originate from a vertex and intersect the opposite side at a right angle.  This is called the altitude. The point where the altitudes cross is the orthocenter.

The green lines are drawn midway along each side and intersect the sides at right angles. They cross at a single point within the triangle. These are the perpendicular bisectors (mentioned yesterday).

The red shows that a straight line can be drawn to connect the intersections of the orange, blue and green lines. This is called Euler's Line, after the mathematician.

If you draw a few circles to help describe triangles, you will find that the center of the incircle is where the triangle's angle bisectors meet. That point is called the incenter. 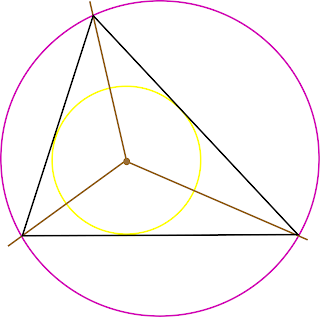 I'm stopping here because I am getting totally confused. We'll skip over calculating the area, sines and cosines, vectors, trigonometry and other aspects of triangles.

Some day we will tackle non-planar triangles - what happens when you draw a triangle over a curved surface, like the Earth - a global triangle.
Posted by Excelmathmike at 10:05 AM