In Excel Math we teach kids how to plot points on a graph, and to make charts.

Believe it or not, this can be done without using Excel or another spreadsheet or without Powerpoint or another display program. Close that window! and work along with me. 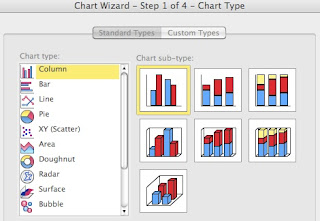 We still can do it the old-fashioned way, by thinking and drawing. For example,


Here are the recent viewers in the top 4 countries from which this blog is viewed.
USA 7447, UK 1199, Canada 874, Aus 436.
I got these figures from the Visitors box in the left-hand margin of this screen.
Let's make a pie chart - that's a hard one. Here's how I would construct it:

3. We could draw this freehand, but let's do it the proper way and calculate the degrees of the pie that belong to each country. There are 360 degrees in a circle, so the USA gets 75% of 360, or 270 degrees, the UK gets 43 degrees, Canada 32 degrees and Aus gets the other 15 degrees of the circle.

4. We think up a title for the chart. How about  Percentage of Viewers in Top 4 Countries

5. We draw a circle and divide up the pie using a protractor or by eye.

6. Here's a hand-drawn version captured with my phone camera. This took me about 90 seconds to draw, including looking around in the drawer for my green highlighter. 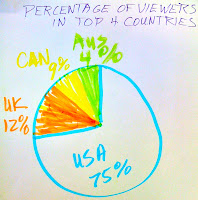 7. Here's my high-quality version, created using Adobe Illustrator. This took me about 10 minutes to create:

8. Finally, here's a chart made using Microsoft Excel. It took me about 60 seconds to make it, including entering the data. Why do you think they invented the spreadsheet Chart Wizard! 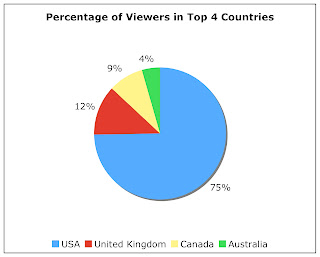 That's partly because I already knew what I wanted to show. I didn't have to stop at the front screen (shown at the top above) and ponder the dozens of variations of charts. That could have added 5 minutes.

Of course by now, the numbers have changed. Rats!
Posted by Excelmathmike at 11:11 AM