I found lots of software related to bells. The first category was factory and school bell software, to ring bells to indicate work shifts or classes are over. Then there was some software for churches, so they could "ring bells" using a computer and speakers.Then I got complete side-tracked by a bunch of sites ranting about "Ma Bell" (AT&T) and its issues! And discussions on how to draw a bell curve using Microsoft Excel.

I took a short trip through Apple's App store, where I found a few bell programs.
The reviews were generally negative on most of these apps. Why? Because they don't sound like bells. Not surprising, considering an iPhone has a tiny speaker.

There is some uniqueness to the sound of a bell that is very hard to quantify. Bell sounds are unlike many other sounds that can be reproduced by speakers or headphones. As yesterday's post indicated, some of the sound is generated in our ears, and not from the source (bell or speaker).

Finally, I found some nifty software called Abel, Mabel and Mobel. Abel runs on PCs and Mabel on Macs. Mobel is for iPhones. The creator of these programs gives all the profits to restoration of real bells.

Of course, if you really want to hear bells, go find some real ones! Most ringers welcome new folks. Be prepared to use your logic, timing, math and arms.

Or get your own! You can buy here. Use your math while shopping, and you will learn that an average church bell is 28 inches in diameter and weighs 400+ pounds. I found a source that shows typical weights for bronze bells, by bell diameter. Here are a few: 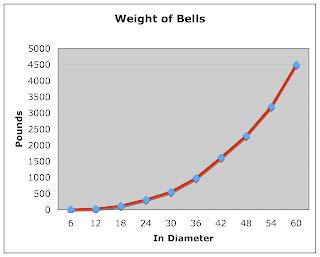 This data should be in a table.
So I made one.


Finally, my wife asked me to explain the poor grammar in my choice of the Bell Post titles. It's the title of a song I like, by Bob Dylan. I also found another recording by Liza Minelli that was completely different - but the same title. There appear to be at least 100 different songs available with Bells in the title!

We can end with Ring Them Bells' cryptic lyrics:

Ring them bells, ye heathen
From the city that dreams
Ring them bells from the sanctuaries
’Cross the valleys and streams
For they’re deep and they’re wide
And the world’s on its side
And time is running backwards
And so is the bride

Ring them bells St. Peter
Where the four winds blow
Ring them bells with an iron hand
So the people will know
Oh it’s rush hour now
On the wheel and the plow
And the sun is going down
Upon the sacred cow

Ring them bells St. Catherine
From the top of the room
Ring them from the fortress
For the lilies that bloom
Oh the lines are long
And the fighting is strong
And they’re breaking down the distance
Between right and wrong


I'd like this set for of 6 bells for Christmas, just in case you are feeling generous:

Posted by Excelmathmike at 12:19 PM