Yesterday I talked about the saturation of the US market, by television and then by personal computer. The statistics were fairly simple, appropriate for we who have only studied math in elementary or secondary school. This isn't a blog with "rocket science" analysis, just a place to investigate interesting subjects and a bit of the math behind them.

Today we take a look at the refrigerator - an appliance so common in America today that it's nearly impossible to imagine living without one. Can math help us understand the refrigerator?

My wife's great-grandfather Morris was a mining engineer in the northern Mexico desert 100 years ago. He loved to surprise visitors from the United States by offering them ice cream in the middle of summer. How  did he keep it frozen? In an icebox - a large cave filled (during the winter) with blocks of ice and straw. Go here to see his book.

My wife's great-uncle John sold refrigerators in the 1930's. He was a top executive with Frigidaire, making his personal fortune selling "boxes full of cold air." These appliances were greatly appreciated in Los Angeles, a fast-growing, hot and dusty corner of the US. Refrigerators were much better than ice boxes. Here's Frigidaire's one-millionth unit. 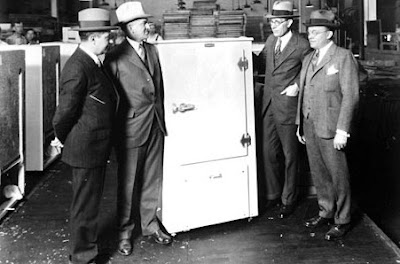 When I was growing up, my uncle Dick was president of LA Cold Storage, a company with the largest refrigerated warehouse on the West Coast. Today they chill 5.7 million cubic feet! I guess refrigeration runs in our family, although personally I am not that fond of the cold - I really suffered when visiting this Swedish Ice Hotel!

Sorry for the detour - now back to our topic of the day.

In the United States, England and France, ownership of refrigerators after WWII rose from under 10% (late Forties, early Fifties) to over 85% (mid-Seventies). My guess it it's now over 100%, with some households having more than one.

Since US households all have refrigerators already, manufacturers try to encourage us to replace our old ones BEFORE they wear out, thus reducing electricity consumption. This chart shows how energy is being saved (red line) as we replace (blue line) our smaller (17 cubic foot) refrigerators with cheaper (green line), larger (21 cubic foot) refrigerators. The data came from an energy blog/newsletter. [click the chart to enlarge it] 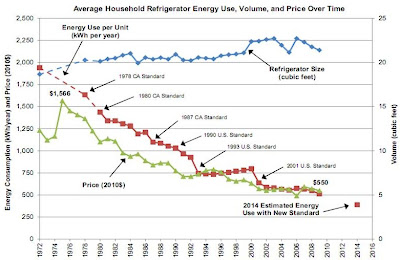 To see how refrigerators are adopted by households, we need to look at other countries coming up the curve of household automation. Here's a chart from a study of appliances in developing countries. I found the study very interesting even though it had a fair amount of complex statistical analysis. 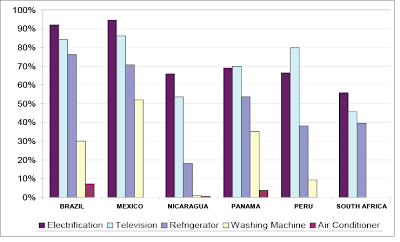 The data implies this sequence of major purchases after electricity reaches a household: television, followed by refrigerator, washing machine and air conditioner. This information supports what we Americans know from experience:

There's a close link between watching television and needing to drink a cold beverage, while the clothes are in the washer. Hence the development of a recliner chair with built-in drinks cooler.