The Star-Spangled Banner—Long May She Wave

During the War of 1812, the British tried to capture the port of Baltimore and Fort McHenry. (Fort McHenry was built prior to the War of 1812. The fort is named for James McHenry, Secretary of War, 1796-1800.)

Francis Scott Key, an American lawyer, watched the battle from a British ship in the harbor. Mr. Key had gone there to ask for the release of a friend who had been taken prisoner. 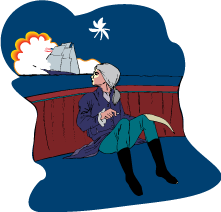 The battle was fierce and lasted all night. The sounds of fighting suddenly stopped just before morning. Key thought the battle had been lost. However, when the sun came up on September 14, 1814 soldiers at the fort raised a huge American flag to celebrate victory of British forces. Key saw the huge American flag waving high above the fort. He knew then that the American troops had successfully held off the British.

Key was so inspired by those "broad stripes and bright stars," he wrote a poem. He used these new words with a melody from a familiar drinking song to set the poem to music. The poem became the words to the national anthem of the United States, "The Star-Spangled Banner." Most of us know the first verse but might be hard-pressed to remember the others:


O say, can you see, by the dawn's early light,
What so proudly we hail'd at the twilight's last gleaming?
Whose broad stripes and bright stars, thro' the perilous fight,
O'er the ramparts we watch'd were so gallantly streaming?
And the rockets' red glare, the bombs bursting in air,
Gave proof thro' the night that our flag was still there,
O say, does that star-spangled banner yet wave
O'er the land of the free and the home of the brave?

On the shore dimly seen through the mists of the deep
Where the foe’s haughty host in dread silence reposes,
What is that which the breeze, o’er the towering steep,
As it fitfully blows, half conceals, half discloses?
Now it catches the gleam of the morning’s first beam,
In full glory reflected now shines in the stream,
’Tis the star-spangled banner - O long may it wave
O’er the land of the free and the home of the brave!

And where is that band who so vauntingly swore,
That the havoc of war and the battle’s confusion
A home and a Country should leave us no more?
Their blood has wash’d out their foul footstep’s pollution.
No refuge could save the hireling and slave
From the terror of flight or the gloom of the grave,
And the star-spangled banner in triumph doth wave
O’er the land of the free and the home of the brave.

O thus be it ever when freemen shall stand
Between their lov’d home and the war’s desolation!
Blest with vict’ry and peace may the heav’n rescued land
Praise the power that hath made and preserv’d us a nation!
Then conquer we must, when our cause it is just,
And this be our motto - “In God is our trust,”
And the star-spangled banner in triumph shall wave
O’er the land of the free and the home of the brave. 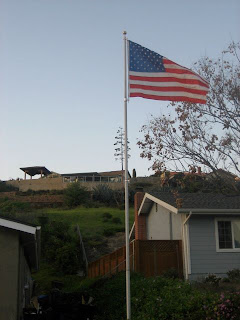 Congress proclaimed this song the U.S. National Anthem in 1931. See Key's original manuscript at the Smithsonian website. These words gave new significance to our country's flag. Since then, generations of Americans have revered the flag, assigning to it their own emotions and memories.

On this Memorial Day, we'll see lots of flags flying around our neighborhoods to honor the men and women who have died while serving in the military. Originally known as Decoration Day, Memorial Day began in the years following the Civil Way and became an official federal holiday in 1971, observed on the last Monday of May.

Over the years, our family (just like many others) has celebrated by visiting a local cemetery, holding family barbecues, swimming, and/or attending parades. Unofficially, it marks the beginning of summer. However you celebrate, enjoy your Memorial Day!
Posted by Unknown at 5:00 AM