In modern times, Christians all over the world celebrate the birth of Jesus Christ on Christmas, which falls on December 25 (tomorrow). This date may have been chosen to offset pagan celebrations of Saturnalia and Natalis Invicti. Some believe that celebrating the birth of Jesus, the “true light of the world” was set in synchronization with the December solstice because from that point onward, the days began to have more daylight in the northern hemisphere. Read more about the winter solstice on our previous blog post, Celebrating the Winter Solstice.

Christmas is often referred to as Yule, which may have derived from the Norse word jól, referring to the pre-Christian winter solstice festival. Yule is also known as Alban Arthan and was one of the “Lesser Sabbats” of the Wiccan year in a time when ancient believers celebrated the rebirth of the Sun god and days with more light. This took place annually around the time of the December solstice and lasted for 12 days. The Lesser Sabbats fall on the solstices and equinoxes.

The Feast of Juul was a pre-Christian festival observed in Scandinavia at the time of the December solstice. Fires were lit to symbolize the heat, light and life-giving properties of the returning sun. A Yule or Juul log was brought in and burned on the hearth in honor of the Scandinavian god Thor.
A piece of the log was kept as both a token of good luck and as kindling for the following year’s log. In England, Germany, France and other European countries, the Yule log was burned until nothing but ash remained. The ashes were then collected and either strewn on the fields as fertilizer every night until Twelfth Night or kept as a charm and/or as medicine. 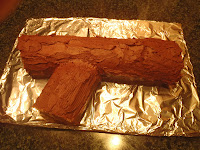 This is a yule log or "buche de Noël" my daughter made for her high school French class to eat on their final day of school before the winter break. Here's the recipe.

Christians around the world celebrate the birth of Jesus, God's Son, on Christmas day. Many churches hold special services on Christmas Eve and Christmas Day as well as on the Sundays surrounding those dates. We sing Christmas carols, add more lights to our homes, decorate Christmas trees, hang wreaths and garland, light candles, exchange gifts, and retell the story of St. Nicholas (Santa Claus).

Nicholas was born during the third century in the village of Patara, in Greece (now on the southern coast of Turkey). His wealthy parents raised him to be a devout Christian, but died in an epidemic while Nicholas was still young. Obeying Jesus' words to "sell what you own and give the money to the poor," Nicholas used his whole inheritance to assist the needy, the sick, and the suffering. He dedicated his life to serving God and was made Bishop of Myra while still a young man. Bishop Nicholas became known throughout the land for his generosity to people in need and his love for children. St. Nicholas' feast day on December 6th is the main day for gift giving and celebrating in much of Europe. 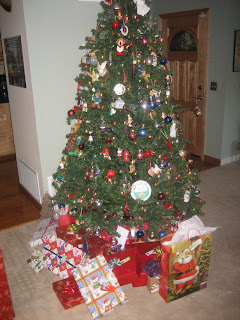 In the Netherlands St. Nicholas is celebrated on the 5th, the eve of the day, by sharing candies (thrown in the door), chocolate initial letters, small gifts, and riddles. Dutch children leave carrots and hay in their shoes for the saint's horse, hoping St. Nicholas will exchange them for small gifts. Here in the United States, children sit on Santa Claus' lap and let him know what gifts they would most like to receive when he arrives with his sleigh and reindeer on Christmas. Many stories and legends have sprung up around St. Nicholas. Read more at StNicholasCenter.org.

However you celebrate this special season, we wish you and your family a Merry Christmas and a Joyeux Noel!

New to Excel Math? Learn more on our website: www.excelmath.com
Posted by Unknown at 5:00 AM