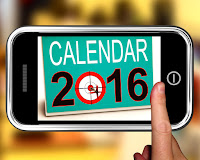 Perhaps you've heard that this year 2016 is a leap year. How do we know that?

We use the figure 365 for the number of days in a year.

In actuality, the number is closer to 365.25. To compensate for this discrepancy, every four years we have what is called leap year.

In leap years, a day is added to February. Normally February has 28 days.

However, every 4 years, we give February 29 days to  help synchronize the calendar year with the solar year, or the length of time it takes the earth to complete its orbit about the sun,  about 365.25 days.

These are the end-of-century years that are not evenly divisible by 400.

These rules only apply to the Gregorian calendar currently used by American and European countries.

Several other calendars are used by Asian countries.

Here's a formula we can use to find out if a year will be a Leap Year:

Can you determine which of these years were leap years? The answers appear below.

Mid-Year Strategies for Success with Math

Celebrating e-Week in the Math Classroom