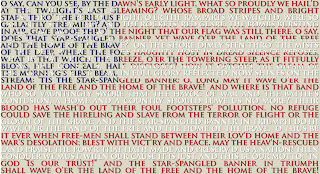 National Anthem Day is celebrated on March 3rd of each year in remembrance of this occasion.

“The Star-Spangled Banner” is the national anthem of the United States of America.

At the time, Francis Scott Key was a 35-year-old lawyer and amateur poet.

The poem was set to the tune of a popular British drinking song, written by John Stafford Smith for the Anacreontic Society, a men’s social club in London. “The Anacreontic Song” (or “To Anacreon in Heaven”), with various lyrics, was already popular in the United States. 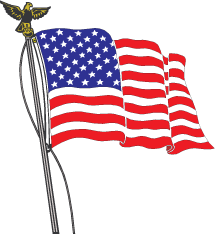 Set to Key’s poem and renamed “The Star-Spangled Banner”, it would soon become a well-known American patriotic song. With a range of one and a half octaves, it is known for being difficult to sing.

Although the song has four stanzas, only the first is commonly sung today, with the fourth (“O! thus be it ever when free men shall stand…”) added on more formal occasions. You can see the verses in red, white and blue, creating the flag at the top of this post.

The fourth stanza includes the line “And this be our motto: In God is our Trust.” The United States adopted “In God We Trust” as its national motto in 1956. This motto is included on the head side of our coins.

If your students need help identifying coins and U. S. Presidents, try the presidents game at U.S. Mint.gov for a fun way to practice. Several presidential coins or portraits are pictured along with related questions. Your students answer questions such as, "This president was elected in 1960." Students drag the correct coin or portrait into a box to answer each question.

Excel Math lessons give students lots of practice learning coins, counting money, working with decimals, and much more. Take a look at sample lessons on our website: http://www.excelmath.com/
and visit our web store to place an order: https://excelmath.myshopify.com/

Mid-Year Strategies for Success with Math

Celebrating e-Week in the Math Classroom

Snowflakes: Basic Math Facts Bulletin Board
Posted by Unknown at 6:57 AM