Today in the Excel Math blog we are going to use one of my favorite subjects - GOLD - to illustrate a couple of math skills that we feel kids should learn in elementary school. Here's a stack of gold bars, just to whet your interest.

I used this same illustration 18 months ago, in another blog on gold. You can check to see how your country's numbers have changed since then - are they saving or spending their gold? 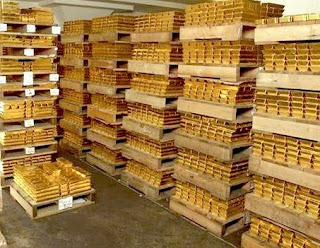 Remember number lines and timelines? We start teaching them as early as Kindergarten.

Here's a quick, 5600-year review of mankind's encounters with gold. The data comes from a website operated by The World Gold Council. [click on the image to enlarge it]

Timelines help us see events in relationship with other things happening at various points in time.

Graphs visually depict changes over time. Here's a chart showing how the price of gold was stable for centuries. The value is displayed by the vertical axis and the years (timeline) are on the horizontal axis.

After many countries linked the value of their currencies to the value of an ounce of gold (1870-1900), gold prices doubled to about $35 an ounce. That price remained stable for another 75 years, until many nations de-coupled themselves from gold. Suddenly around 1980, lots of everyday folks began to buy and hold gold. Some won; others lost in this speculation. The chart below shows the price of gold took 25 years to re-attain its 1980 peak.

Sometimes the data you accumulate can't be displayed graphically like we did above, because the units are unrelated, or the scale is too great. So you construct a table. Here's an example:

I took the number of tonnes (metric tons, or 2204 lbs) of gold held by the top 10 gold-holding countries in the world's reserve banks. I added the country populations, and calculated the ounces of gold per citizen, and the value at today's price. Clearly the Swiss are ahead in wealth, measured by gold reserves.

I hope these graphics make you feel wealthy as well as math-literate!

Posted by Excelmathmike at 1:43 PM