This is the third of a series illustrating the use of math with geography.

Today we will tackle the subject of sub-divisions of the country that are within the US. As I am not a political scientist, geographer or history teacher - the only reason for discussing these items is to demonstrate the importance of knowing basic math (as taught in our Excel Math curriculum).

Here are some of the "administrative divisions" of the United States:

I invite you to visit this Wikipedia page, choose any state and select a list of settlements or towns. Or, if you prefer your data closer to the source (and harder to parse), go to this Census page. Here is a map of my state, California, showing the population distribution. [click on map to enlarge] 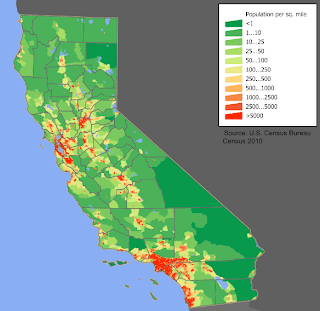 California is divided into 58 COUNTIES, which are responsible for all elections, property-tax collection, maintenance of public records, and local courts plus the job of enforcing the law within all areas NOT inside an incorporated city. There is one CONSOLIDATED CITY-COUNTY in the state, San Francisco. Two counties have been consolidated into others, five areas have tried to split out from existing counties and failed, and at least a half-dozen proposals are pending to change county status. [click map to enlarge]

There is no end of applications for math when studying people that live within a certain area of the world. Imagine the complexity of analyzing all the communities in all 182 regions that have visited this blog!


Posted by Excelmathmike at 1:59 PM