Something smells around here

A few years ago a local restaurant called Phil's BBQ got in trouble with its neighbors for smelling too much like a smoky barbeque. That's what it was of course, but the smells traveled and lingered, driving the neighbors nuts.

After lots of discussion, debate and distress, Phil's BBQ moved to a new location with extra-strong ventilators. The problem was solved, and now they have more happy fans than complaints. (ha ha)  Click on the BBQueue Cam button to see Phil's crowds.

I started thinking about smells, because I have a great sniffer.

What is a smell (odor, aroma, fragrance), and how do we decide when something is TOO smelly?

Definition of an Odor

An odor occurs when volatile compounds and particles (things that evaporate and drift in the wind) strike special sensors in our palate and provoke a reaction. 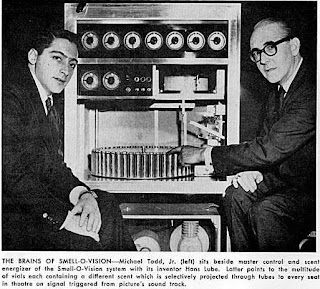 Despite the efforts of many scientists, we are not very good at either measuring or generating smells mechanically. The Smell-O-Vision machine was one attempt to commercialize scenting-on-demand.

Attempts to measure and quantify smells are often made in response to lawsuits, such as the BBQ smell at Phil's, or the odor downwind from a refinery or chicken farm.

Odor concentration can be measured in European Odor Units (ouE/m³). The smell measuring process involves a bunch of people in a carefully controlled room. An odor is introduced into the room via small openings in the wall. When half the people in the room are sure they smell something new, that indicates a level of 1 odor unit. When the people all run out of the room screaming, the level has reached 6 odor units.


Odor Annoyance Assessment (does it stink?)


Direct odor sampling involves taking people to where the smell is. It's really hard to analyze a smell this way, because ambient air is full of other smells. Indirect odor sampling is done by collecting some odorous air in bags. The bags are then analyzed in an odor laboratory by trained sniffers. This method has drawbacks too, due to the smell fading (or fermenting, or concentrating) in the bags.

Alexandra Horowitz has written a new book called Inside of A Dog. She says that dogs not only hold more scent in their noses than we can, but they constantly refresh what they smell, the way we can keep shifting our eyes around to get a better look at something.

For dogs, “Smell tells time. Perspective, scale and distance are [possible] in olefaction. Odors are less strong over time, so strength indicates newness; weakness indicates age. The future is smelled on the breeze that brings air from the place you’re headed.”

While we look around and just see the present, the dog’s nose is picking up “not just the scene currently happening, but also a snatch of the just-happened and the up-ahead.”

So is it unreasonable to say dogs can smell the future? Can they tell in advance when my shoes are going to need a little baking soda treatment?

Posted by Excelmathmike at 8:31 AM