Where in the world are you? What time is it there? What day is it?

Can you find yourself on this map?

To explain time zones isn't the easiest thing! But I'll give it a try.

As you may know, Earth is a rotating spherical planet tilted at a 23.5% angle to vertical, orbiting in a slightly-egg-shaped path around the sun.

A day is defined as one rotation of the earth around its own axis. It's about 24 hours in duration.

A year is one rotation of the earth around the sun. It's approximately 365 days long.

Each city had its own time standard based on when the sun was directly overhead (noon).

When trains were beginning to spread across countries, a few trains crashed into each other due to time discrepancies. So we came up with a system of time zones so we could keep groups of cities on exactly the same time (and keep the trains synchronized).

The first concept was to divide the earth's surface into 24 bands, each an hour wide, or 1/24th of a daily rotation of the earth. The first zone is centered on Greenwich, near London England. On the other side of the earth is the International Date Line, 12 hours apart from Greenwich.

The time zone concept was a good one, but lots of adjustments had to be made to the bands to avoid splitting cities and countries. We tried to make them follow borders. After wars, lines were changed again. And what about the oceans? How about the poles where the time zone lines converge?

The net result is we now have around 45 zones. Most of them are an hour wide, but some are 15 minutes, 30 minutes or 45 minutes offset from their neighbors. See if you can locate some of the smaller ones on the map. Find Nepal, for example.

There are plenty of "time zone" watches that show time in 2 places at once. But they normally just have 2 hour hands, assuming the minutes stay the same in both zones.

Here's a watch made to show 2 time zones that can be any number of minutes apart. 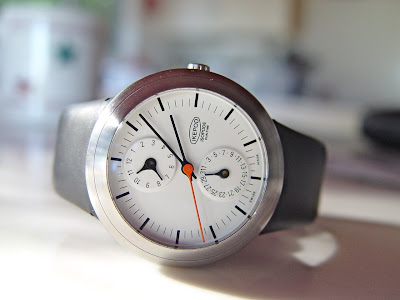 Don't ask about Daylight Savings Time! That's a whole other story.
Posted by Excelmathmike at 10:27 AM