Mathematics sometimes has a way of missing the point!  Take the phrase "divide evenly."

In math it means when you divide two numbers, there is no remainder or there is a remainder of zero.

That leads us to the term Factors. Factors are all the integers that divide evenly into another integer (whole number). They are "what you get" when you divide.

The Greatest Common Factor is the largest integer that will divide evenly into any two or more integers. For example, let's take 24 and 30. What's the largest number that can be divided evenly into both of these numbers?

A related concept is the the Least Common Multiple, or the smallest number into which two numbers will divide evenly. The least common multiple of 24 and 30 is a big number. Let's see if we can find it:

You see, in the pursuit of mathematics we have completely missed the entire point of this blog. After Thanksgiving, we had some apple pie left over. As I was cutting the remaining (large) portion of the pie into two pieces, my wife said Be sure you divide evenly. As if I might do anything else! 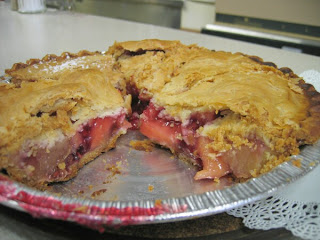 If trust and belief in the innate goodness of men does not exist at your house either, you might investigate some of these gadgets that claim they will improve the even division of baked goodies.

This one works if you are starting with a complete pie, and marks/slices it into even pieces. How convenient! You can get others for 6, 8, 10, 12, etc. Or you could make your own if there are 7 in your family... 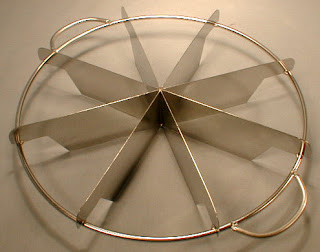 In contrast, the following device starts with the assumption that any pie-slicing person would be cheating on the slicing. To foil him you bake a rectangular pie (and get more in the oven!) using a dish marked with clever reference lines.

The cut pieces (a) look almost like they came out of a round pie dish and (b) are evenly-sized. This took some serious thinking on the part of its inventor. Go here to buy one if you are impressed. 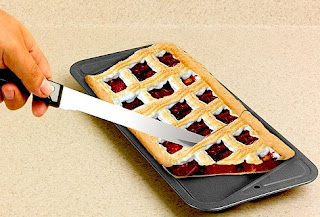 Apparently I am not the only person who's been accused of not dividing equally!

You may also like these articles:
Creating Electronic Math Flashcards
Thank You, Teachers!
May Day Math
Seven Steps to Successful Math Students (& Parents)
Posted by Excelmathmike at 9:53 AM