Editor's Note: Nought is Olde English for not a thing, or nothing, or zero. As in: "There are lots of noughts in this blog."

I like visual images. Pictures. Movies. But I'm not really a movie FAN. It was with great amazement that I read this morning about the asking prices for "movie libraries." Another announcement said Michael Dell and two partners have purchased and donated a fantastic and enormous library of prints. There were  numbers attached, so I knew that elementary math could be applied to the newspaper stories!

How much can you earn with a film library?

Estimates place the earning power of the Miramax Library at between $50,000,000 (fifty million) and $100,000,000 (one hundred million) per year. Some have speculated upwards of $300,000,000 (three hundred million) but others scoff at that suggestion. We'll ignore it.
Hummm. Err. Harrumph. Could we have a lower price please?

Before I parted with my hundreds of millions, I'd want to know more details about what this collection earns. And what's happening with downloads, and peer sharing of video files, and declining sales of DVDs, and digital recording off television, and so on.

Rupert Murdoch already said No to both collections. That should say something about the prices.

But I might go to the University of Texas someday and see some of those prints. Here's a sample from the Magnum Library, showing a bunch of folks floating down a river in 1953. 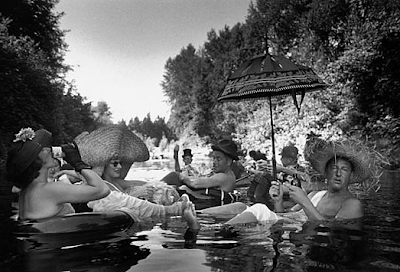 I recommend a visit to the Magnum Photo of the Week Blog.
Interesting Side Note:
Miramax was named in honor of Miriam and Max Weinstein by their sons Bob and Harvey Weinstein. AnsMar, the parent company of Excel Math, is named in honor of Anson and Marian, the parents of our founder Janice Raymond.
Posted by Excelmathmike at 8:24 AM