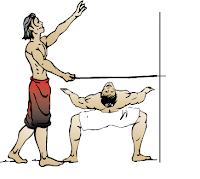 Limbo is a game where people bend over backwards to shimmy under a moveable stick. See the photo to get an idea about the game.

You win if you make it underneath without touching the stick. You lose if your chin or hands touch the stick, if you knock it off the holder, or if you fall down or touch the ground - it's much harder than it looks!

Where does the math come in? Well, a similar activity is played out every time a ship passes under a bridge. In most cases, there's plenty of room above the ship. But not always. And the pilot MUST be good at math.

The air gap minus the air draft has to be a positive number, or the ship will hit the bridge. Here's a drawing from the NOAA website showing the Air Gap under the Bayonne Bridge in New York.

Things can change quickly in the ship-limbo game!
Our government is very concerned that ships don't hit bridges. Here's the Air Gap graph for today. Notice that it changes by more than 4 feet in less than 4 hours and might now be under 150 feet. 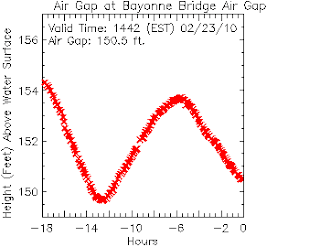 This is such important information that the numbers are calculated every 6 minutes and posted on the web. Here's a text summary for right now:

Observations for New York/New Jersey PORTS 2010-02-23 15:01:02 EST
High water conditions exist for Kings Point, The Battery, and Sandy Hook.
Water levels are rising above predictions by up to 2.1 feet at Kings Point, Sandy Hook, and Battery.
Currents at The Narrows are flooding at 1.1 knots.
Reported winds are generally from the northeast, between 5 and 16 knots with gusts to 19 knots.
Reported air temperatures are in the mid to high 30s °F, and reported water temperatures range from the high 30s to the low 40s °F.
Barometric pressure is falling, with readings between 1007.4 and 1008.8 mb.
Air gap is 150.5 feet and decreasing at Bayonne Bridge Air Gap, and 227 feet and decreasing at Verrazano-Narrows Air Gap
Miscalculating the clearance can ruin a bridge, sink a ship, and/or result in deaths. Here's a picture of a freighter that failed to clear a bridge. Four lives were lost and a ship and bridge ruined. 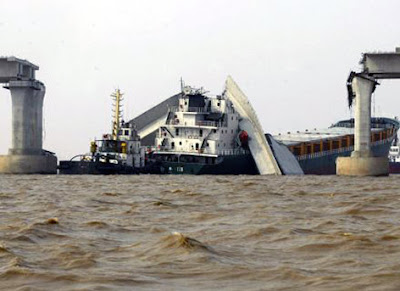 A bridge over the Chesapeake was knocked down by the freighter you see here. 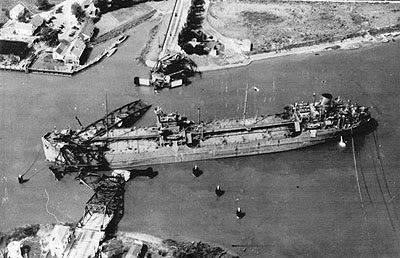 I found a story about the Narrows Bridge in Vancouver that was struck by a run-away barge. The barge didn't ruin the bridge at first, it was simply stuck in place. But as the tide lifted the barge, it also lifted the bridge span off its supports, and the span fell into the water - thus ruining the bridge and the waterway access at the same time! 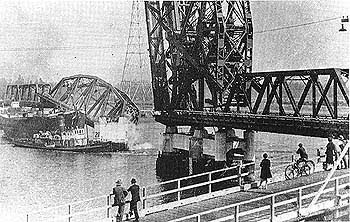 Posted by Excelmathmike at 10:08 AM