Water seems to be on my mind lately, so today we'll see if we can use some metric math about rivers. Not just any rivers.

The biggest river in the world. And a little local river.

Before the "A" word was associated with an Internet retailer, or fierce women warriors, the Amazon was flowing across South America to the Atlantic Ocean.

It drains an area of 7 million square kilometers.  It has more than 1,100 tributaries flowing into it. During flood season it's 100-200 kilometers wide! There are ZERO bridges across the Amazon. That is partly because of its size, but also because it flows through the jungle and there aren't roads that need to cross it.

Here's a Wikipedia map showing the main tributaries of the Amazon River. Approximately 15-20% of all the fresh water in the world flows through the Amazon and into the Atlantic! 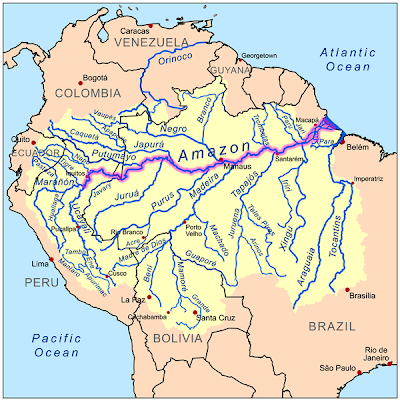 An interesting unit of river size is called Strahler number. This scheme is named after Arthur Strahler, a professor at Columbia University. About 60 years ago he came up with a strategy to describe how many branches and tributaries make up any hierachical system (which includes rivers).

The Amazon is a Strahler Order 12 river, the most complex drainage network in the world.

In contrast, my local waterway, the San Diego River, is 83 km long, with 625 km of tributaries and drains 1140 sq kilometers.  At its widest point it's only about 200 meters wide. 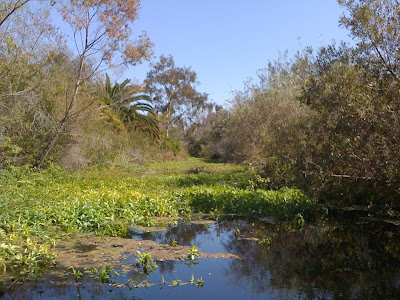 The San Diego River is an Order 5 river. Even though it's only a fraction of the size of the Amazon, it's a nice place to spend some time.

Click here to see all about it.   Or watch a sunset there. 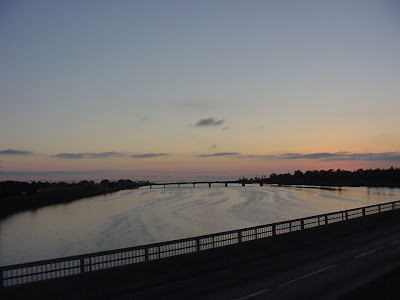 Posted by Excelmathmike at 11:58 AM