Last week's blog on molasses coincided with me taking some pictures of bees in the flowers outside  Math. So I thought of honey. Perhaps you would like to see the bees hard at work getting nectar from our blossoms. [Click any of the photos for a much closer view!] 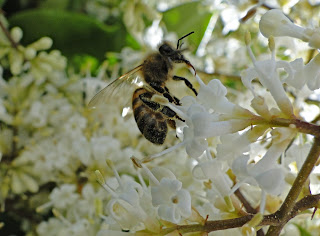 Bees are very helpful in pollinating plants - both for beauty and for food crops. In California this is especially important because we grow so much of the USA's food. But the bee population has been shrinking. Mites are killing many bees, and poisons put onto the plants kill many more of them. 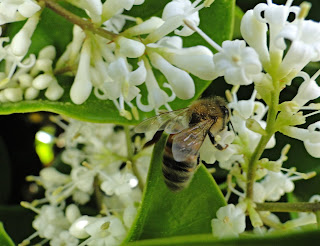 Many people are afraid of bees, so if a swarm comes into their yard, they call an exterminator and all the bees are killed. It's true that some people may have a reaction to bee stings, but that's a very small percentage of the population, and it's rare that bees sting if they aren't bothered. I was bothering them a lot with my camera, but didn't have any trouble. 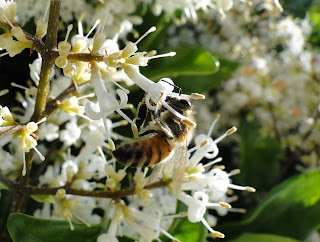 Bee stings have not been studied all that well, but evidence in the past 20 years suggests that very few people face any risks. But folk wisdom (fear?) is hard to overcome. Let's look at some numbers:

Children may indeed have frightening reactions to stings but they are almost never life-threatening, no matter how worried the mother may be. As a kid, I jumped into a lake to avoid some bee stings. Today I learned that bees can only fly at 4 mph, which is about a gentle walking pace. We can easily outrun bees if we need to do so.

Very few people in the USA die each year in reaction to bee stings; perhaps 20-50. Most are over 40 and have serious, pre-existing heart conditions. So the bee sting was a contributor to an already-stressed person. I learned that ants and wasps cause more deaths than bee stings, as their venom is much more intensive.

If "Cause of Death" interests you, look here. I searched the 1482-page document listing ALL CAUSES OF DEATH IN THE USA in 2006, and found that only 8 people died of allergic reactions of any kind. One was a child, and the rest were between 40-85.

Mostly you should just avoid getting stung because it hurts a bit. We discussed the pain of a bee sting in an earlier post. And of course, sadly the bee dies too, because the stinger is barbed and stays in your skin. That's not the case with yellow jackets, bumblebees and other stinging insects. They can sting repeatedly. 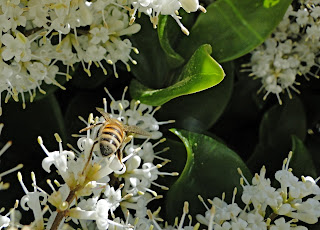 I kept a beehive for about 10 years, and I suspect I got stung about 30-40 times in the first few years, but only once since then that I can remember. Here I am with my hive. 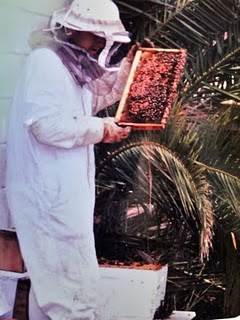 Posted by Excelmathmike at 10:35 AM