Friday I talked about triangles and provided some animated illustrations. In the process, I discovered that we had a surplus of appearances of the word TRIANGLE in our Sixth grade Excel Math curriculum. Had we taught the subject too often? Had we tested students to exhaustion?

I investigated this situation and learned it was due solely to a Triangle Reference Page which had adversely influenced the Adobe Acrobat word counter. 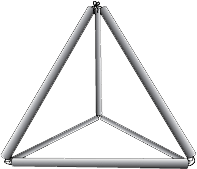 Triangular Pyramid (made of drinking straws)
I created the page about 4 years ago, and had forgotten about its existence. Here's some of the content, which you must admit is fairly triangle-dense in its vocabulary!

Posted by Excelmathmike at 11:59 AM