If you study geometric figures you often learn interesting things. We do a bit of exploration of trigons with our elementary math students.

(Since triangles are three-sided polygons you may also call them trigons if you wish, but very few people will know what you are talking about.)

Pythagorus was a Greek scholar who lived about 2,500 years ago. He is credited with many theories about geometry - especially triangles. Here are two:

1. The sum of the three interior angles of a triangle is equal to 180 degrees (two right angles).

2. For any right triangle, the area of a square constructed along the triangle’s longest side (the hypotenuse) is equal to the sum of the area of squares built along the other two sides. 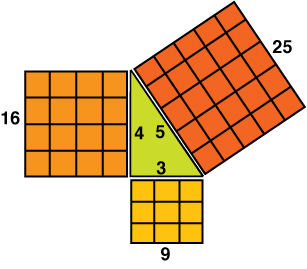 Normally we say this in a sloppier fashion, like this: the length of the hypotenuse squared is equal to the sum of the squares of the other two sides.

Here are some other triangle properties:

3. If one line segment of a triangle is extended outside the triangle, the size of that exterior angle of a triangle (angle w) is equal to the sum of the two remote interior angles (x and z). (That’s because y and w are supplementary and add up to 180 degrees.) 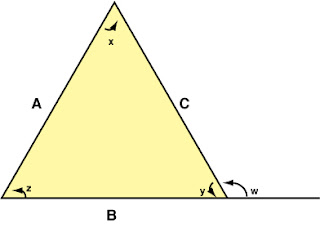 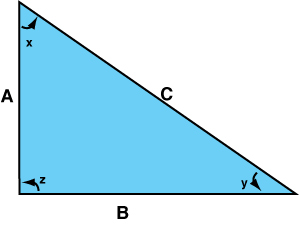 6. Triangles are similar if the ratios between the lengths of their corresponding sides are constant, and the corresponding angles of each triangle are congruent. (Similar triangles have exactly the same shape but are not necessarily the same size.)

Does this sort of thing interest you? Do you want to delve into triangles further? How does the following paragraph sound to you?

Let S stand for a triangle's side and A for an angle, and let a set of Ss and As be concatenated such that adjacent letters correspond to adjacent sides and angles in a triangle. Triangles are uniquely determined by specifying three sides (SSS theorem), two angles and a side (AAS theorem), or two sides with an adjacent angle (SAS theorem). In each of these cases, the unknown three quantities (there are three sides and three angles total) can be uniquely determined. Other combinations of sides and angles do not uniquely determine a triangle. Three angles specify a triangle's shape but not size (AAA theorem). One angle and two sides not containing that angle may specify one, two, or no triangles (ASS theorem).

If you like this kind of thing you can go onto Wolfram's Mathworld site and read more.
Posted by Excelmathmike at 10:32 AM