After yesterday's blog about garbage trucks, I got feedback that folks really enjoyed the post. So I decided to do another one on garbage trucks.

Many kids love garbage trucks. Why? My wife told me how her kids on the playground stop and run over to watch the garbage trucks pick up bins at the school. Why are so many kids (and grown-ups) fascinated with garbage trucks?

I decided to research this a bit, and saw this quote today:

Just as toddlers are fascinated with how their bodies work, they often love machines ... The garbage truck is a great big, loud machine. It has moving parts that go up and down and it seems big and strong. The trash collectors are big and strong too, able to drive those trucks and make the grinders work. Kids want to be like the grownups - those guys control machines even bigger than they are! My kids even learned the days of the week so they could anticipate when it was garbage day and be sure to be outside in time to see the truck come.

What age group likes watching garbage trucks? I scanned a few videos on YouTube, and noticed some comments. These are arranged in order from lowest age to highest:
Adults watch garbage trucks even if they don't love them Researchers in Chicago studied garbage collection - but not because the drivers are "rock stars." They want to operate the trucks more efficiently. Here's a study of their report:

We investigated garbage trucks in Chicago. Our analysis showed that city blocks differ in the rate at which garbage accumulates. Formerly, each truck visited the dump twice a day regardless of load. We devised flexible routing so some trucks go to the dump once a day, while others go twice. We use a Markov decision process to model the impact of flexible routes. This dynamic scheduling algorithm adjusts the number of dumpsite visits throughout the week to maximize service, which means we could reduce trucks by 12-16% - a significant savings. In addition, we created a "night shuttle" program. Garbage trucks used to leave early to go dump their loads and get back to their assigned yards by the end of each shift. Truck crews now remain on their routes and leave the trucks fully loaded at the end of the day. The trucks are shuttled to their dump sites, emptied, and returned by a crew of second‑shift drivers.

What does a garbage truck driver do all day? (Math, but fun) Starts at 6 am and drives for 8-10 hours over a 45-60 mile route, stops at 500-800 homes, handles a truck that can hold 16,000 pounds of garbage and goes to empty his truck twice a day. Top speed of a garbage truck is around 55 mph, but they rarely go faster than 15 mph. Would you like to ride along? Have a virtual ride first:

Garbage Truck Math Game  Plot the most efficient route for your garbage man. Count the number of homes and decide if this can be done in one day. Then if possible, with no back-tracking, no left turns, no backing up and no wasted time, design a route. Here's an example of what I mean [click image for a larger version]: 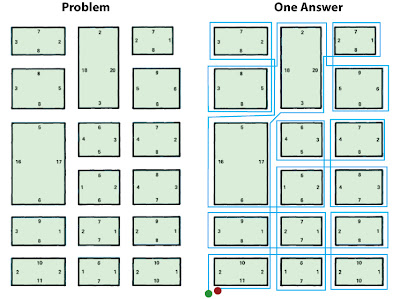 Now for a real challenge. Below you can see a city map. Alleys are shown with dotted lines. The 997 houses are shown by numbers on each block. Divide the route into two equal halves with a minimum of backing up and left turns. Click on the map below [to enlarge it], print it out, and start plotting! 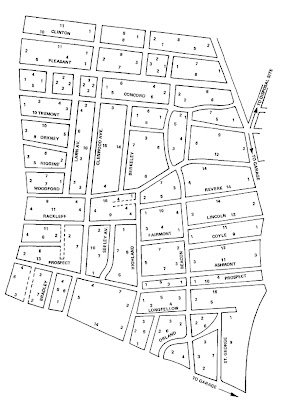 (Yes, I know this is what we have computers do for us - but who is going to program the computers? If you are good at this, you've got a job awaiting!)
Posted by Excelmathmike at 1:39 PM