I have a few more observations to make about the mathematical implications on which is the first day in a week? (our customer's question), and how we teach kids about weeks and calendars in the Excel Math curriculum.

In kindergarten, we introduce words that describe adjacent days. Then we connect them with the days of the week.

Finally we introduce the numbers for days, weeks, months and years. We show the "rotation" as the months of the year go by, and we hint at the seasons.

Fortnight: 14 days, two weeks, or half of a moon cycle (14.7 days) [lunar]
Month: a time unit based on the motion of the moon; 29.5 days [lunar]
Year: a time unit based on the rotation of the earth around the sun; consisting of 12 months, 52 (non-ISO 8601) weeks, and 365.25 days. [solar]
Decade: 10 years [solar + man-made]
Century: 100 years [solar + man-made]
The week is the most familiar time-keeping interval to be set at an arbitrary length, by people in different religious traditions and cultures. This Wikipedia article describes 3-day through 10-day weeks used in various times and places. If you consider the options, the length of a "week" can't be too short (it must be longer than a day) or too long (shouldn't be be too close to a month).  By definition a week is shorter than a fortnight.

The fortnight is commonly used in the UK and other Commonwealth countries, and is a typical interval for paychecks and other social benefit payments. Since it's a two-week time period, its first day is the same as the first day of the week that country has chosen to observe.


Nobody worries much today about the first day of the month except when they don't get a benefits check. In previous times, the first day could be very significant. Some Jewish holy men were given relief from traveling restrictions on the Sabbath so they could go to the eastern edge of the mountains and see the sunset or moonrise, marking holy days and months.

Although we have been debating which day is the proper first day of the week, the actual first day of the week has little consequence to most of us, other than affecting how we read calendars. I will make sure the curriculum conveys that sense to kids.
For an easy conclusion of this series of blog posts, I'll portray a couple watches that tell you the sequence of days of the week. 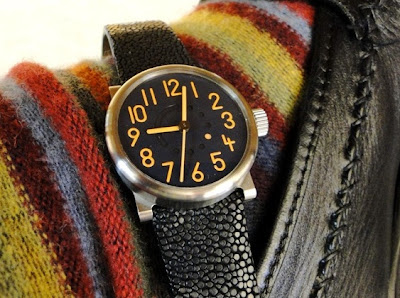 The watch above indicates day of the week with an orange spot that moves alongside the hour markers. You can set the 7th day to be either Saturday or Sunday, as you choose. During the evening of the 7th day it speeds up, racing past 8, 9, 10, 11 and 12 to land next to the 1 at midnight. 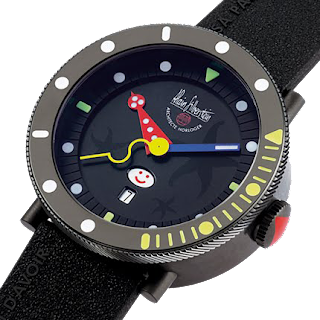 This colorful watch is showing the time as 10:10:38 on a Saturday.  Alain Silberstein created the Smileday graphical image watches to convey a changing mood for each day of the week. 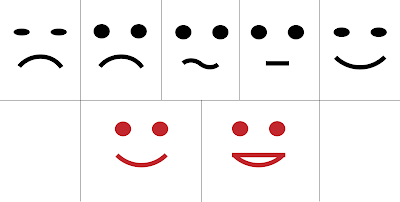 Posted by Excelmathmike at 4:05 PM