A hammer and a nail

Panacea was a goddess of healing in Greek mythology. She was thought to carry a potion that would heal any sickness. Her name evolved into an English term for a drug to cure all diseases. In addition, Panacea may have led us to the hammer and nail theory:

In 1964 Abraham Kaplan said, "I call it the law of the instrument, formulated as follows: Give a small boy a hammer, and he will find that everything he encounters needs pounding."

In 1966 Abraham Maslow revised this, saying, "It is tempting, if the only tool you have is a hammer, to treat everything as if it were a nail."

Common usage simplified this to: "If you only have a hammer, everything looks like a nail."

We eventually arrived at the software programmer's notion of the golden hammer - the hope that if we are lucky, a single, familiar technique solve virtually all software problems.

Apparently the term "when all you have is a hammer" has become the golden hammer for journalists, as it received 15.7 million hits when I searched for it today. It's a great blog title.

So why do I raise my hammer in the math blog? Because I read yesterday:

The reason you have to learn math is to solve problems when you grow up.

This author is implying Math is a golden hammer. Math is a panacea.

I'm sorry, but I disagree. Math is not a cure for all that ails us. Math is helpful if the world around you is filled with math-resolvable problems - but most problems aren't solvable with math, and math is good for a lot more than just problem-solving.

Two years ago I wrote, If language is a system for encoding and decoding information so it can be shared, then math indeed can be a language. A language of counting, measurement, shapes and calculation. A language with precise definitions and specialized terms.

You learn math to talk to other people about money, or brag about your batting average or mention your low score on this weekend's round of golf or the high mileage you just achieved with your new hybrid car. Those aren't problems, they're opportunities. Please allow me to rephrase the statement:

The reason you have to learn math is to communicate about many things that are important to you.

Okay. Now we can get to the interesting part - what is a hammer?

A hammer is a hand tool meant to deliver a concentrated impact to an object. The most common uses are for driving nails, shaping metal and breaking objects. Hammers are designed for specific purposes. Although they vary widely in shape and construction, most hammers have a handle and a head, with the weight concentrated at the head.

And why do you need one? 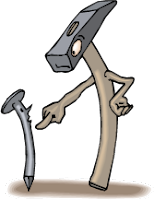 Notice there was only one mention of nails in this list. Although they are indeed very useful tools, hammers aren't a panacea for all that's ailing around us. And neither is math.

Posted by Excelmathmike at 1:44 PM