On this day in history, March 21, 1790, Thomas Jefferson reported to U.S. President George Washington as the new secretary of state—the first secretary of state in this country. In 1797 Thomas Jefferson became the nation's second vice president, and just four years later he took office as the third U.S. president (1801-1809). For this reason he is often called the 1-2-3 president: first secretary of state, second vice-president, and third president. He is also well known as draftsman of the Declaration of Independence and was responsible for the Louisiana Purchase. 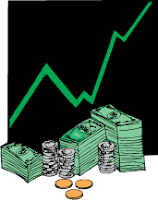 Both Thomas Jefferson and George Washington are featured on coins and bills. Read more about presidents (and their spouses) on coins in our previous post.

In Excel Math, we help students recognize coins, calculate cost per unit, solve word problems using mental multiplication, and calculate change using the fewest coins. Not every student will become a mathematician, but each one can learn to view math as something achievable and useful in every day life.

Many graduates of Excel Math tell us math is now their favorite subject. Here's an example of a fourth grade Excel Math Student Lesson Sheet about calculating change. (Download Excel Math worksheets from our website.) See if you can solve problems 1-6:
Now that we've counted our change, here are the presidents who appear on dollar bills. George Washington, the first president of the United States, has appeared on the one dollar bill since 1869:

Can you name the other statesmen who appear on dollar bills (not presidents)? The answer appears at the bottom of this post.

Continuing with the presidents who appear on bills, President Thomas Jefferson is on the two dollar bill. We don't see too many of these anymore:

President Andrew Jackson is on the twenty dollar bill:

The other statesmen who appear on dollar bills (not presidents):

Alexander Hamilton appears on the ten dollar bill. Here's one that tore in half as soon as it was picked up (don't try this at home):